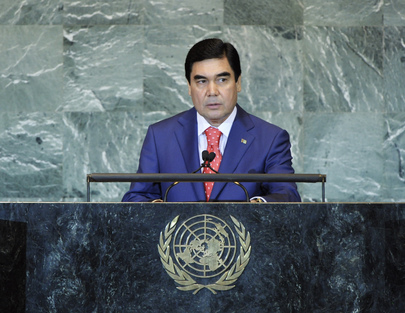 GURBANGULY BERDIMUHAMEDOV, President of Turkmenistan, said that systematic efforts of the international community should be devoted to peace through development, in an integrated manner, which was essential for sustainable, stable and balanced international work in all spheres for which the United Nations had foremost responsibility. Highly respecting the United Nations Charter, his country pursued a steady and purposeful policy of peace and good neighbourliness, rejecting the use of military force as an instrument of foreign policy. In that light, he proposed that work start in this Assembly session on a declaration on political and diplomatic tools for solving international issues.

At the regional level of Central Asia and the Caspian Sea basin, he said his country had proposed several initiatives for maintaining peace and stability that had received a positive reception. He offered to host a representative forum on the security of the region next year, and suggested that the establishment of an advisory council on the peaceful development of the region might become one of its political outcomes.

On the development side of global security, he said his country aimed at the maximum promotion of sustainable development by attaining the Millennium Development Goals and “the creation of efficient models of multilateral reciprocal action for the solution of urgent international issues”. In that context, he said his country’s proposals on reliable transportation of energy resources for the international market had received positive responses, but it was time to develop concrete measures. A new mechanism for interregional dialogue on energy under the aegis of the United Nations was needed, with the States of Central and South Asia, Caspian Sea, Black Sea and Baltic regions participating with all other States, companies and international financial institutions concerned.

He said that the world financial crisis demonstrated the necessity of the formation of viable models and realistic plans that took into account the interests of all States of the world. Turkmenistan planned to take an active part in that process, contributing the successful experience of his country in a number of areas through its candidacy in the Economic and Social Council for the term of 2013 to 2015. The country also intended to announce a number of proposals at the Rio+20 conference. In that light, he underlined the importance of the creation of a modern transport infrastructure, noting work with regional partners on the “optimization of traffic flow in the Eurasian space”, for transit in the North-South and East-West corridors. Suggesting that the United Nations could play an important coordination role in that effort, he proposed the development of a Special Programme on the Development of Transport, including a study of opportunities in transport between the Caspian and Black Seas, Central Asia and the Middle East.

Describing national efforts on climate change, he proposed to establish a specialized, interregional institution for systemic action on climate change under the United Nations, offering to host it and provide necessary infrastructure in his country’s capital Ashgabat. The environment of the Caspian Sea, the importance of which went well beyond regional boundaries, also required joint efforts, and his country proposed to organize a forum on the issue. Turning to humanitarian issues, he pledged his country’s continued commitment to the implementation of all related conventions, particularly those related to the plight of refugees. Much could be learned from his country’s experience in granting citizenship for refugees and stateless persons, he stressed. For that purpose, an international meeting on the issue in Ashgabat in 2012 would be useful. In all areas, he said, his country was ready to take an active part in the creation and implementation of innovative models of cooperation to address the key issues of modern times.