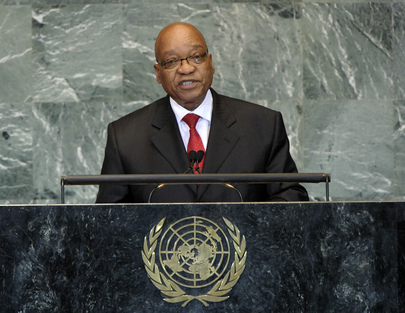 JACOB ZUMA, President of South Africa, noted the importance of mediation as a tool for settling disputes, saying it was enjoying renewed relevance given the number of current conflicts.  The United Nations should always maintain its impartiality, while regional organizations, which had a crucial role to play in conflict-resolution and mediation processes, must be enforced and enhanced rather than undermined.  The African Union continued to play a significant role in mediation, trying to produce African solutions to African problems, he said, recalling its critical role in seeking a peaceful solution to the Libyan crisis.  However, the African Union’s efforts had never been given a chance, he said, pointing out that military action had been preferred over peaceful means.

Nonetheless, South Africa would work with the National Transition Council, through the African Union and the United Nations, as it proceeded to form an inclusive transitional Government and took up the Libyan seat in the regional body.  He called for a cessation of hostilities during the transition period, and an end to aerial bombardment by NATO.  He went on to describe arms proliferation in Libya as a major concern, saying that the transitional Government would need support to address that issue, which posed a grave threat to regional security if left unattended.

The new Libyan authorities should ensure the protection of migrant workers, especially those from sub-Saharan Africa, who numbered about 2.5 million, he said, calling for immediate measures to end the killing, arbitrary arrest and detention of migrant workers and black Libyans.  He also expressed full support for the Palestinian Authority and its intention to seek United Nations membership for the State of Palestine.  “It is a decisive step towards achieving lasting peace, economic cooperation and prosperity for the millions of people in the Middle East,” he said, adding that South Africa also supported the ongoing struggle for self-determination by the people of Western Sahara and calling for the lifting of the economic embargo against Cuba.

Turning to United Nations reform, he said Security Council membership should be consistent with the principle of equitable geographical representation, and reiterated Africa’s call for representation in the permanent category.  He said South Africa was involved in efforts to address climate change, to provide famine relief in Somalia and to realize the Millennium Development Goals, pointing out that with just four years to go before the target date, it was clear that many targets would not be met, particularly in sub-Saharan Africa.  South Africa called on the international community and the United Nations to redouble efforts to assist countries that were lagging behind.

On the subject of racism, he said the scourge remained a challenge to humanity and highlighted 8 January 2012 as marking the 100th year since the founding of his country’s governing African National Congress.  South Africa would host a symposium tomorrow, 22 September, on its contribution to the fight against racism and racial discrimination, he said, expressing hope that, working together, the current Assembly session would promote a more equal and just world.