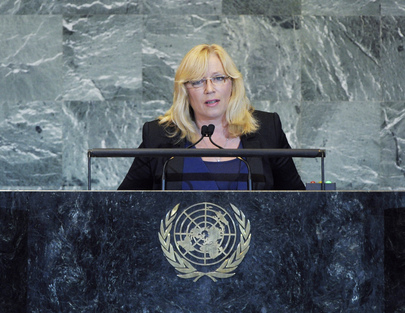 IVETA RADIČOVÁ, Prime Minister of Slovakia, said when the President of Brazil addressed the Assembly, she said her female voice was the voice of “democracy and equality”. And that, expressed with courage and sincerity, is the main change for coming years. In light of the economic and debt crisis, there were still no adequate solutions at a time when the world was facing common risks in the areas of the economy, government and politics. The majority of the world’s population expected economic growth, prosperity and a better quality of life, and those living in poverty deserved speedy action and results from political leaders. Slovakia had done its homework to stabilize its economy, including its pension system, sustainability, fiscal responsibility, labour market reform and measures to tackle corruption and increase transparency.

Courage was needed in the Eurozone to return to the old principles necessary for successful international cooperation and integration, as well as stricter European and national fiscal rules, controlled default and new rules for managing the financial sector, she said. As a member of the Economic and Social Council, Slovakia believed that that body had the capacity to contribute more significantly to joint efforts. To be able to do that, its mandate must be urgently adjusted so that it could react more swiftly to the economic and social needs of the world. “In times of dire financial restriction of our own national budgets, we, as the United Nations, also need to learn to do more with lesser resources,” she said.

Among Slovakia’s priorities was international terrorism, and respect for international law, human rights and the rule of law should be an integral part of the fight against that scourge. Turning to peacekeeping, she said with the proliferation of United Nations missions in recent decades and the growing complexity of managing their mandates, her country supported every effort to increase their effectiveness and efficiency. Peace was not merely the absence of war, she said. Peace meant safety in all areas of people’s lives. There was no chance for lasting peace without sustainable development, an area that required more work and a concerted effort. To that end, Slovakia’s aid was aimed at some of the most troubled regions, in areas including food delivery, refugee assistance and technical assistance.

Mediation and the peaceful settlement of disputes was the right path to follow, she said, especially during times of sky-rocketing peacekeeping costs. Mediation was the savviest form of investment and the most efficient way to prevent conflicts before they escalated. She welcomed the adoption of the first General Assembly resolution dedicated especially to supporting mediation as an essential tool for maintaining peace and security, which Slovakia co-sponsored. Focusing on eliminating the primary causes of conflicts was needed, not just dealing hastily with their grave consequences. She stressed that the important role of women was often underestimated. The United Nations had a central role in effective multilateralism and concentrated efforts helped to create just and lasting solutions.