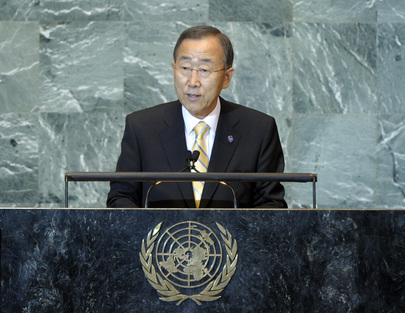 United Nations Secretary-General BAN KI-MOON said that late next month, Earth’s 7 billionth citizen would be born.  If that child was a girl, she would most likely be poor and might not grow up to be healthy and strong.  “If she is especially lucky, she will be educated and go into the world full of hopes and dreams,” he said, noting that beyond that, the only thing about the newborn that would be certain was that she would be entering a world of vast and unpredictable change in the environmental, economic, geopolitical and demographic spheres.

He said the world’s population had tripled since the United Nations had been created, and, as its numbers kept growing, so did the pressures on land, energy, food and water.  The global economic crisis continued to shake businesses, Governments and families worldwide.  Joblessness was rising, social inequalities were widening and too many people lived in fear, he said.  The United Nations existed to serve those in whose name it was conceived — “We the Peoples”.

During his first term as Secretary-General, Mr. Ban said, he had travelled the world to meet people where they lived, to hear about their hopes and fears.  Just two weeks ago, he had visited Kiribati and the Solomon Islands, where villagers had told him they feared the threats posed by climate change.  Waters were washing into their homes, and one day they might be swept away entirely.  A young girl had asked him: “What can the UN do for us?”  He posed that same question to the world leaders gathered in the Assembly Hall today:  What could be done?  How could the United Nations held people find greater peace, prosperity and justice in a world full of crises?

Reflecting on his five years in Office, he said he was filled with passionate conviction — and unshakable faith — “in the enduring importance of this United Nations”.  In that light, he drew the Assembly’s attention to five generational opportunities to shape the world of tomorrow by decisions that would be taken today.  “The first of and greatest of these is sustainable development — the imperative of the twenty-first century,” he declared, urging the international community to “connect the dots” between climate change, water scarcity, energy shortages, global health, food security and women’s empowerment.  “Solutions to one problem must be solutions for all.”

He stressed that the upcoming United Nations Conference on Sustainable Development — known as Rio+20 — must succeed.  “We must make progress on climate change.  We cannot burn our way to the future.  We cannot pretend the danger does not exist, or dismiss it because it affects someone else,” he continued, calling on all Member States to reach a binding climate agreement — one with more ambitious national and global emission targets.  Meanwhile, action was needed on the ground now to cut emissions and jumpstart adaptation measures.

“Energy is key — to our planet, to our way of life.  That is why we have launched a pioneering new initiative, ‘Sustainable Energy for All’,” he said, calling also for investment in people, especially women’s and children’s health.  Development was not sustainable unless it was equitable and served all people.  It was also necessary to intensify the worldwide effort to achieve the Millennium Development Goals and to think “bigger and beyond the 2015 deadline”.  To that end, Member States should work together to develop a new generation of sustainable development that picked up where the Millennium Goals left off and agree on a means to achieve them.

He went on to highlight his second generational priority — prevention — noting that this year, the Organization’s peacekeeping budget would total $8 billion.  “Consider the savings if we act before conflicts erupt, by deploying political mediation missions, for example, rather than troops,” he said, noting that the United Nations record in countries like Guinea and Kyrgyzstan proved that the Organization knew how to take preventive measures.

To prevent human rights violations, he urged all to work for the rule of law and stand against impunity.  “We have carved out a new dimension for the ‘responsibility to protect’.  We will continue,” he declared, adding: “Let us remember, development is ultimately the best prevention.”  With that, he urged Member States to commit the resources required to raise prevention from an abstract concept to a core operating principle across the Organization’s work.

He said the third imperative — building a safer and more secure world — was a core responsibility of the United Nations.  The world body had been “sorely tested” in that regard over the past year.  He cited the political crisis in Côte d’Ivoire, ongoing challenges in Iraq and Afghanistan, as well as the situation in Darfur, “where we continue to save lives and help keep peace under difficult circumstances”.

Turning to the Middle East, he said the international community must break the stalemate.  “We have long agreed that Palestinians deserve a State.  Israel needs security.  Both want peace.  We pledge our unrelenting efforts to help achieve that peace through negotiated settlement,” he said.

He urged maximizing “the force for good that is UN peacekeeping”, which today was more capable than ever of more rapid and effective responses.  Moreover, the United Nations remained the world’s first emergency responder, as had been proved in Haiti, Pakistan and beyond.  It had strengthened its field support and reconfigured the architecture of peacekeeping operations.  It was essential that the Organization build on its most effective tool for humanitarian relief — the Central Emergency Response Fund (CERF).  In that regard, he urged Member States to help save the children of the Horn of Africa.  Pointing to the lesson of the Fukushima nuclear power plant, he called for strong international safety standards to prevent future disasters, and he urged leaders to “keep pushing” on disarmament and non-proliferation.  “Let us fulfil the dream — a world free of nuclear weapons,” he said.

As for the fourth opportunity — supporting nations in transition — he said that the “dramatic events” in North Africa and the Middle East “inspired us”, and the international community must help make the Arab Spring into a “true season of hope for all”.  While a new United Nations support mission was being deployed to assist transitional authorities in Libya, the situation in Syria remained a “special concern”.  For six months, the international community had witnessed “escalating violence and oppression”, and even though the Syrian Government had pledged to carry out reforms and listen to its people, it had not done so.  “The moment to act is now.  The violence must stop,” the Secretary-General declared.

Continuing, he said the United Nations must help countries find the right path, whether that country was emerging from war, or moving from autocracy to democracy.  The United Nations might be involved in building back public services, organizing elections or writing a Constitution.  Those were challenging tasks, and nowhere was that more clear than in the case of South Sudan, where the Organization was helping to build a functioning State after decades of conflict.

Fifth, he said, the United Nations could dramatically advance its efforts in every sphere by working with — and for — women and young people.  Women represented more than half of the world’s unrealized potential.  They held families together, drove economies and they were natural leaders.  “We need their full engagement — in Government, business and civil society,” he declared, adding that the United Nations now had its own dynamic and powerful engine for change, the United Nations Entity for Gender Equality and the Empowerment of Women (UN Women).

He was pleased to see so many women at this year’s General Assembly, and he especially welcomed Brazilian President Dilma Rousseff, the first woman in the Organization’s history to open the general debate.  He went on to say that the United Nations Secretariat would continue its policy of promoting women.  It would also focus on the new generation.  He called for finding new ways to create decent jobs and opportunities for young people around the world.

“These are extraordinary challenges.  We cannot respond in ordinary ways,” he said, adding: “We need one thing above all else — solidarity”.  It all began with resources, without which the United Nations could not deliver.  Scaling back was no answer.  He asked Governments that had generally borne the lion’s share of costs not to flag in their generosity.  Even in the face of tight budgets, investing through the United Nations was smart policy.  Burden-sharing lightened the load.

To the rising Powers, whose dynamism increasingly drove the global economy, he said that with power came responsibility.  “For all, I ask that you give what you can — expertise, peacekeepers, helicopters.  Never underestimate the power of you leadership,” he said.  Yet, Governments could not do the job alone, and therefore, Member States must broaden their bases and extend their reach to harness the full power of partnership across the wider United Nations system.  Indeed, when the United Nations unparalleled convening authority and technical resources were combined with the various strengths of Governments, the private sector and civil society, “we are a formidable force for good”.

Finally, the Organization must adapt to change.  In times of austerity, it must learn to do more with less and invest global taxpayers’ money wisely by “Delivering as One” — eliminating waste and avoiding duplication.  Accountability and transparency would remain the world body’s watchwords.  The budget process must be streamlined so that it could deliver at a cost no nation could match on its own.  “We must keep pushing to develop a more modern and mobile workforce — a UN that is faster and more flexible […] that helps solve real-world problems in real time,” he said.  Importantly, everything must be done to protect United Nations staff.  The world body had lost too many lives; it had become too soft a target.

In closing, he said that 7 billion people looked to world leaders with hope.  “They need solutions; they demand leadership; the want us to act” with compassion, courage and conviction, he said.  The United Nations was the answer.   “Let us carry on this journey together.”