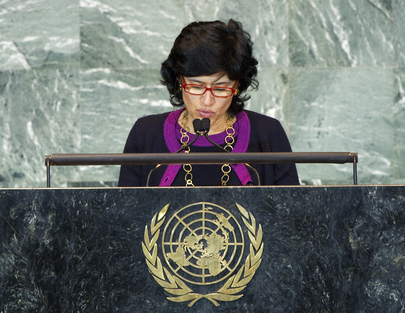 ANTONELLA MULARONI, Minister of Foreign and Political Affairs with Functions of Prime Minister of San Marino, said that on the occasion of the tenth anniversary of the attack on the World Trade Centre in New York, she wished to stress the importance of an effective fight against terrorism and effective actions aimed at preventing the development of terrorist groups. A crucial task for policymakers was, therefore, to create the conditions so that terrorism could find no breeding ground. San Marino supported the Assembly’s theme of peaceful settlement of disputes. It had always believed in the power of dialogue, democracy and tolerance, values upon which peaceful coexistence among peoples was based.

The unusual scale of the Arab revolution, which had taken the world by surprise, demonstrated that major political and institutional changes were needed due to changes brought about by a globalized world. If the United Nations intended to play a pivotal role in managing global governance, it should be able to interpret the need for such changes and support them. The current global and economic crisis had demonstrated that existing institutions were unable to respond rapidly and adequately. Further, that had led to the formation of informal groups, such as the Group of 8 and the Group of 20, which had increasing influence. Those bodies, in their decision-making process, should be more transparent and inclusive and should take into consideration the interests of non-Member States, in particular developing countries.

San Marino was concerned about some of the consequences of the economic crisis, including unemployment, and felt that the United Nations should pay special attention to that issue. Also worrying was the sovereign debt crisis that faced States, she said. The United Nations should focus on those issues. Additionally, the destinies of the world’s peoples depended on the global threats in an increasingly direct way, including: climate change and biodiversity; food security; public health; disarmament and non-proliferation of nuclear weapons; and others. Those threats were interdependent, and the new form of international cooperation and multilateralism should be based on that fact. For example, climate change had led to a reduction in global food production, with the most damaging effects seen in Africa and Asia. And the end result was the humanitarian emergency in the Horn of Africa, where a severe drought was affecting over 12 million people. Further, sea level rise was affecting not only small islands, but large islands and countries with coasts at sea level.

San Marino had been following with interest the reform process of the Security Council. The process was prompted by the conviction that intergovernmental negotiations were the right framework within which it would be possible to find a solution, taking into account the interests and positions of all. San Marino believed that the five key issues of the reform — categories of membership, the question of the veto, regional representation, size of an enlarged Council and working methods — were closely interrelated and should be considered as a whole. The revitalization of the General Assembly was also necessary.

Turning finally to the situation of persons with disabilities, she said since the 2006 adoption of the Convention on the Rights of Persons with Disabilities, much remained to be done to ensure its implementation through the establishment of legislative frameworks and policies at a national and international level. Noting the strong link between disability and poverty, she said that targeted strategies and policies should be taken with regard to children with disabilities. In general, women and children still suffered most from violence, abuse and exploitation, she stressed, saying that San Marino, therefore, joined the international community in supporting Resolution 65/1 “Keeping the Promise: Uniting to achieve the Millennium Development Goals”. The protection of those who lived in extremely difficult conditions, representing a large share of the world’s population, should be the primary task of every individual and State, she stressed. “Their progress is our progress, and their smile will be the light allowing us to look to the future with optimism,” she concluded.