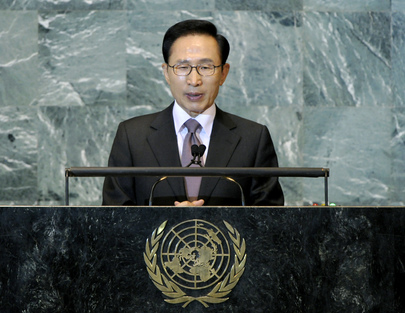 LEE MYUNG-BAK, President of the Republic of Korea, said maintaining peace and security was the fundamental responsibility of the Organization, and the Republic of Korea was proud to participate in 10 peacekeeping missions, including those in Haiti and Lebanon.  But nuclear terrorism was perhaps the greatest threat of all; following the first Nuclear Security Summit in Washington last year, the second Nuclear Summit would be held in Seoul next March, presenting a valuable opportunity to build a more solid system of international cooperation necessary to prevent nuclear terrorism.

He said the market economy and democracy had improved lives, but the growing gap between the rich and poor called for reflection within the capitalist system.  The income gap could destabilize international peace and stood against the vision of prosperity for all.  Aid must support infrastructure and trade-related capacity-building, while multilateral organizations, such as the International Monetary Fund and World Bank, must be strengthened, grounded in the belief that developing countries could expand demand, providing a valuable growth engine for all.  He hoped the Fourth High-level Forum on Aid Effectiveness, to be held in the Republic of Korea in November, would be an opportunity for a new paradigm of development cooperation to emerge.

Technology devoted to protecting the environment would create more jobs and enable sustainable economic growth for decades to come, he said.  The Global Green Growth Institute, founded by the Republic of Korea and like-minded countries, aimed to share cutting-edge technology and experience with developing countries.  The organization had a more important role than ever in restoring equilibrium to the ecosystem and promoting shared growth, and he looked forward to the 2012 Rio+20 Conference to produce a solid action plan towards sustainable development.

The nuclear threat posed by the Democratic People’s Republic of Korea continued to challenge peace, but his country would sustain diplomatic efforts with the international community to achieve denuclearization of the Korean peninsula.  “It is my hope to see the DPRK enjoy peace and prosperity by becoming a responsible member of the international community.  When the DPRK chooses the path to mutual benefit and common prosperity, we will be ready to help in this endeavour along with the international community.  I sincerely hope that this will transform the Korean peninsula from a place of conflict and strife into a bedrock of peace in North-East Asia and the world,” he said.

Since the United Nations establishment, the dynamics of international relations had fundamentally transformed; the Organization should consistently strive to renew and reinvent itself to meet new demands and address diverse future challenges, he said.  “In particular, the United Nations Security Council should be reformed to become more democratic and accountable, so that it can fully fulfil its mandate of maintaining international peace and security.”  His country had been actively participating in discussion on the Council’s reform, and it would continue to contribute constructively to those discussions in the future.