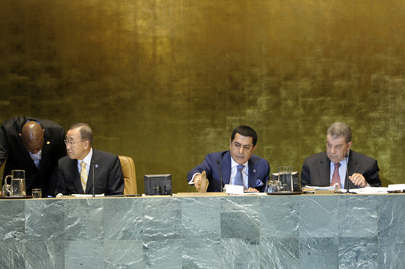 “Let there be no doubt that 2011 is the year of new horizons,” said NASSIR ABDULAZIZ AL-NASSER, President of the General Assembly.  Welcoming “new faces and new friends” to the Assembly’s annual gathering, he stressed that the United Nations would work to ensure that the shifts taking place across the globe resulted in stable and prosperous democracies, continued growth and development and the protection and promotion of human rights.

The United Nations this year welcomed its newest Member State, South Sudan, he noted, adding that the issue of Palestine would also be particularly crucial and receive great attention during the coming session.  In that regard, he looked forward to working with Member States for the attainment of a just and comprehensive negotiated peace settlement in the Middle East, based on a two-State solution and conducted in a transparent, impartial manner, in keeping with the will of the United Nations collective membership.

Indeed, he said, addressing the critical issues on the Assembly’s agenda would require political will, open dialogue, close collaboration and consensus-building.  He placed great value on South-South and triangular cooperation, as well as dialogue among civilizations and advancing the culture of peace, and said that the most vulnerable States should receive the support they deserved.

He said he had identified four key areas to help frame the Assembly’s work this session, he continued:  the peaceful settlement of disputes; United Nations reform and revitalization; improving disaster prevention and response; and sustainable development and global prosperity.  Efforts must continue this session to revitalize the General Assembly so that it maintained its rightful place as the centre of global decision-making.  It should be made more efficient and able to respond more quickly to emerging situations of global concern.  He was also fully committed to advancing efforts to reform the Security Council.

On the issue of improving disaster prevention and response, he stressed that he was “deeply conscious” of the tragic food and humanitarian crisis gripping Somalia.  He would remain fully committed to focusing the Assembly’s attention on that crisis and would also work closely with Member States to further improve prevention and reduce risk and vulnerability to natural hazards.

As the world’s population reached 7 billion people, he said there would be a number of major global conferences related to sustainable development, focusing on issues including desertification and climate change, poverty eradication and the achievement of the Millennium Development Goals.  He urged leaders to find consensus and take “strong and urgent action” to ensure fruitful outcomes.

Recalling that the theme before the Assembly today was “the role of mediation in the settlement of disputes”, he said that mediation stood as foremost among the reasons for the United Nations founding.  The Organization brought legitimacy and operational breadth to mediation efforts.  In its previous session, the Assembly had taken an important step in adopting its first ever resolution on mediation as a vital tool for conflict prevention and resolution.  “It is my intention to give high priority to mediation through this session, to galvanize this theme and operationalize it for real multilateral capacity,” he said, stressing that he would do so in a transparent and interactive manner in close coordination with the Secretary-General, Member States and other relevant actors.