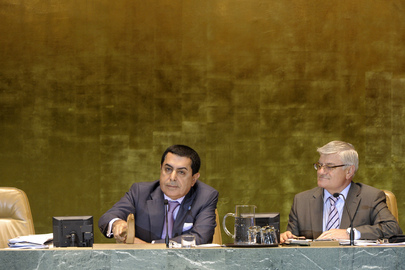 “It has been an historic and unforgettable debate,” said the President of the General Assembly this evening as he closed the annual event, but it was now time to shift attention to the crucial next step, “turning talk into real impact”.

Speaking in the legendary General Assembly Hall, where, since last Wednesday, representatives of 194 Member States and Observers — 100 at the level of Heads of State and Government — had come “to express the hopes and needs of their nations”, the President of the sixty-sixth session, Nassir Abdulaziz al-Nasser of Qatar, said “coming together is the start; working together will get us to the end”.

World leaders, he said, had called on the international community to assist in the fulfilment of their populations’ aspirations for the rule of law, transparency, prosperity, justice and human rights, including responsible freedom of expression.  As they came together to consider such timely and complex issues, the role of mediation was “clearly more relevant than ever before”, he said of the theme selected for the current session — “mediation in the peaceful settlement of disputes”.

But, he noted, claiming centre stage were the tributes paid by speaker after speaker to the hope awakened by the shifts taking place around the globe — especially the Middle East and North Africa — and the courage of those who had fought for freedom, dignity and democracy, and who had made clear that Governments could not suppress their people without accountability.

That renewal of hope and determination dominated discussion on the Palestinian issue as well, when Palestinian Authority President Mahmoud Abbas announced that he had submitted an application to the Secretary-General for the admission of Palestine to the United Nations.  Calling that an “historic moment”, the Assembly President said he had been impressed to hear the overwhelming majority of international leaders call for a Middle East peace resulting in two viable, sovereign and independent States — Israel and Palestine.

Also significant had been the welcome of new leaders to the Assembly’s ranks, he said, pointing to the first President of the newest African country, South Sudan, and the Foreign Minister of the Transitional Federal Council of Libya, both of whom had addressed the gathering.

The spotlight was also focused on the humanitarian crisis in the Horn of Africa, where the worst drought in more than 60 years had left much of Somalia in a declared state of famine, he said.  That concern brought up the need to urgently improve disaster prevention and response — a reform that the Assembly would tackle this session through an important draft resolution.

Throughout the debate, several leaders had called on the United Nations to take the lead in reforming the world economic and financial order, he said, with many seeing that call in the context of the ongoing comprehensive reform of the United Nations.  There was broad agreement on the need for “early consensual reform” of the Security Council, the President said, adding that such reform was inevitable if the Council was to reflect contemporary realities and be more representative, inclusive, democratic and transparent.  He urged Member States to reenergize that process and generate the political will necessary to proceed in a timely manner.