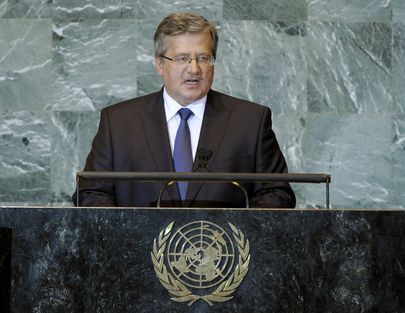 BRONISŁAW KOMOROWSKI, President of Poland, said this meeting was an opportunity to reflect on how to deal with challenges facing humanity. As a country that had become a symbol of positive changes, Poland used to be a nation of a devastated economy, impoverished society and uncertain of its borders and place in Europe. Now, Poland was a democracy with a dynamic economy that saw growth during the financial crisis and was now building good-neighbourly relations under a foreign policy that remained based on solidarity with nations that aspired to democracy and respect for human rights. “We stand ready to share our experience,” he said, noting this approach relating to the societies of Eastern Europe. That applied also to Arab States, which had taken up a similar challenge.

Of those nations, he said: “We wish them luck, perseverance and courage, not only to fight for change, but also to conduct dialogue and communicate with all those who can take part of this process. From our Polish experience, we know that sometimes the inability to communicate and reach compromises, and to overcome internal divisions — the inability to openness and dialogue with those who just recently were seen as enemies — hindered progress and is the cause of failures of movements initiating major changes.”

As the country currently holding the presidency of the Council of the European Union, Poland had seen in the region arch enemies become friends, as the number of countries opting for cooperation over conflict had been steadily growing. The Union had introduced a new quality to international life on a global scale, stabilizing its surroundings, and becoming an inspirational role model in various regions of the world. The European Union was participating in shaping a better world order, better for everyone. He was convinced the Union would emerge from the financial crisis stronger than before. On a global scale, the challenges were considerable, he said, drawing attention to terrorism and the “war” to defeat it. The scourge undermined trust and threatened international stability. The gaps between rich and poor had widened, and climate change, trade and non-proliferation negotiations were stalled. The Middle East process also had not advanced.

However, there were good grounds for optimism, including economic growth in underdeveloped regions and the responsible attitudes of Governments to prevent the economic crisis from becoming as widespread as the 1929 Great Depression. Openness and interdependence, and not protectionism or economic nationalism, had prevailed. And, the Arab Spring, regardless of the dramatic events accompanying the process, was yet another step in the transition of countries towards democracy and the empowerment of individuals and societies.

He said that the road to reaching solutions to key global problems had always led to the United Nations or its specialized agencies. The main tasks were development, security and human rights. The United Nations must ensure effective aid for the poor. As the world faced a new paradigm of global economic exchange, a global equilibrium required States with high export surpluses over imports to switch to growth, stimulated by internal consumption. Domestic demand had saved Poland from the 2008 economic crisis, he said, adding that “if we fail to balance the relationship between these two groups of economies, export-oriented and easily importing, new turbulences await. Developing countries must increasingly take responsibility for the global economy.” The United Nations and entities not related to it, such as the World Trade Organization (WTO), must assist in the evolution of that paradigm.

The issue of international security in its broader and narrower meaning required a new approach, he said. Poland was concerned about a possible return to an arms race and increased military spending. He fully supported the reform of the Conference on Disarmament. Regarding the broad sense of security, he said the United Nations had been, and must remain, the main forum and instrument of international mediation. The Polish Round Table of 1989 helped to transform part of Europe, and that approach would be useful in the Arab Spring process, particularly in Syria, a country of great Islamic culture and traditions. Mediation was an irreplaceable way to a lasting and just peace, a notion that applied also to solving difficult problems in relations between Israel and its neighbours, and with the Palestinian Authority. He urged the Secretary-General to actively use that means of building trust and peace between peoples, cultures and different social groups. A spirit of solidarity should permeate the Organization.