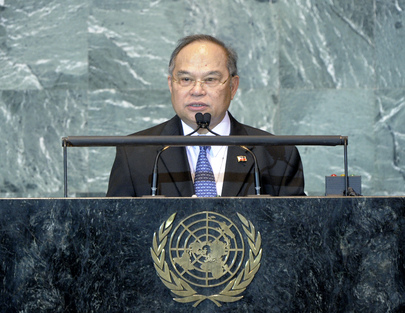 LIBRAN N. CABACTULAN (Philippines) said the collective experience of the United Nations had highlighted that only when nations worked together in firm and determined resolve, could the international community begin to address the many difficulties that confronted it. As the world strove forward together, the international community must renew its faith in the United Nations, reaffirm commitments to the values and principles each had sworn to uphold, and redouble efforts in working for a safer and better world. He said it was necessary to develop a framework for the work of the United Nations, since a peace anchored firmly on a rules-based international system was the only way forward and would ensure equal and meaningful participation for both the established and the emerging, the developed and the developing. Also crucial was to build peace and strengthen international security through disarmament. The irony of global advancement since the two world wars was that the international community not only had failed to leave behind armaments that it had destroyed, but had actually refined them and made them deadlier. Peace must be built through equitable and sustained development, and by protecting human resources and upholding human dignity. The international community was duty-bound to stay true to the core United Nations principle, namely to preserve and protect human rights, particularly for those most vulnerable and living in marginalized sectors, he said. As the world looked to strengthen the ramparts of peace, the important role and contributions of United Nations peacekeeping and peacebuilding must be recognized. Further, as the international community sought to reinforce peacekeeping operations, so too should it continue to examine efforts to maintain stability and security at sea. At present, around 70 seamen from the Philippines were being held hostage by pirates in the Gulf of Aden and the wider Indian Ocean. Terrorism continued to cast its dark shadow on the world, and the decapitation of terrorist organizations had not put an end to that, he said. It was necessary to re-examine the effectiveness of the sanctions against terrorists and efforts to cut the lifelines of terrorist funding. A comprehensive approach, therefore, must be undertaken. Out of the horrors of war, the United Nations had resolved as one global community to strengthen peace. Yet, that peace could easily disintegrate when even just one nation behaved irresponsibly, contrary to the rule and norms by which the United Nations had elected to abide.