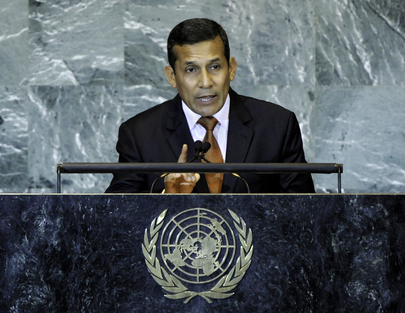 OLLANTA HUMALA TASSO, President of Peru, said his Government had come into office just a few weeks ago. Through the ballot box, the people of Peru had given their support to a great transformation, which would harness the prosperity of the last 10 years for a more socially inclusive life for all Peruvians. In other words, it would turn money into quality of life. Underscoring the State’s responsibility for tracing the path of transformation through policy and politics, he said the State must, above all, answer the people’s interests. To that end, it must be vigilant in defending the rights of all its citizens, particularly indigenous peoples. The new Government would safeguard its people without regard to race or ethnicity. In addition, it remained committed to achieving the Millennium Development Goals.

Warning that extreme interpretations of some values could lead the world to greater confrontations without advances in liberty or equality, he urged the international community to strengthen fraternity as the path to peace. In that context, he added his voice in support of the Palestinians. He further underlined the need for providing social services and equal opportunities for all Peruvians, highlighting, in particular, access to decent employment and health and education services. In addition, his Government was negotiating with the business sector to allow for greater respect of natural resources. It had also promulgated a law on consultations to allow for indigenous peoples to participate in decision-making processes that involved them. As such, Peru was meeting its obligations under the International Labour Organization’s (ILO) Convention No. 169.

In its efforts to fight drug trafficking, the Peruvian Government gave equal importance to reducing both supply and demand, he said. States had a duty to work in a firm and coordinated way to address all links in the criminal chain. The production of the coca leaf provided income for thousands of people without other viable employment options, and it was critical that impoverished farmers be offered alternative employment options. Greater intelligence and financing were needed in order to detect money laundering. Effective controls over precursors were also required. He noted that Peru would convene, in the second quarter of 2012, a high-level meeting on those issues to define specific measures.

Among other important issues, he noted that his Government had called on the United Nations Educational, Scientific and Cultural Organization (UNESCO) to recognize the heritage of the Peruvian Government. He called for fairer and more dignified treatment of migrant workers and immigrants, who were contributing to the economies of both their origin and destination. The Peruvian Government was giving priority to the needs of the most vulnerable, such as children and the elderly. It also sought the further empowerment of women and was committed to implementing the Durban action programme. Underlining the need to address climate change, he appealed for greater international cooperation, as well as an increase in the level of financial and technical assistance given to protect against and mitigate the effects of climate change.

Latin American countries were learning how to overcome their chronic vulnerability in the face of economic crises, he said. Having decided to work together to enhance the economic underpinnings of their countries, they had set up the South American Economy and Finance Council. That commitment to integration was not simply rhetorical, but was a path to development, peace and reconciliation. In that context, he called for an end to the blockade of Cuba. Finally, he reaffirmed Peru’s full support to reforming the Security Council by enlarging its membership and for reforming the Economic and Social Council.