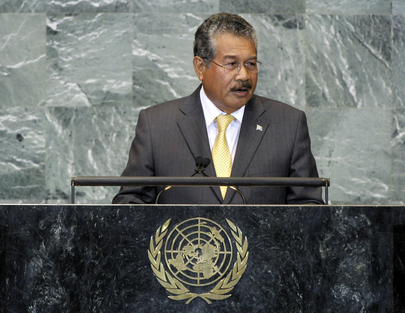 JOHNSON TORIBIONG, President of Palau, focused his remarks on what he termed three pernicious types of “transboundary harms”: the state of the global fisheries; nuclear radiation; and climate change. On the first, his country, which for thousands of years had lived in remoteness and isolation by respecting the environment and managing its natural resources for the benefit of every generation, today found itself the innocent victim of transboundary harm as forces beyond its control, and not of its own making, ravaged the oceans, damaging the land and reefs, and threatened Palau’s very survival. Though the country did its best to act responsibly and sustainably, there was only so much that it could do on its own to protect itself. Palau relied on partners, the international system and the international rule of law to provide a remedy.

He said that, although Palau’s fish were among the most valuable in the world, they were in danger as distant boats did not respect the country’s borders, laws or traditions. They came in “great numbers” for tuna in the Western and Central Pacific region, where Palau was located and took the region’s tuna “for pennies on the dollar”; and also hunted, finned and sold sharks for a tiny fraction of what tourists would spend to see those sharks alive in Palau. “Like the ocean’s currents, efforts to protect the marine environment must flow across boundaries. “It takes international cooperation to protect our marine resources,” he said. Palau and other Pacific small island developing States had undertaken innovative measures to ensure the continued viability of their stocks. They had limited purse seine fishing, agreed to close the donut holes between their jurisdictions and implemented a “vessel day scheme”. Global fisheries should be sustainable; and reckless practices that harmed fisheries and threatened food security had to stop, he asserted.

Turning to his second, particularly insidious, transboundary harm, he expressed fear that this year, nuclear radiation in unknown amounts could have entered Palau’s territory. As someone who had been involved in writing his country’s Constitution, which banned the presence of any nuclear material in the territory, he was proud that Palau had been the first in the world to make such a prohibition. But, he lamented that the law of the land would not protect the country and its people from potential radiation coming from outside its borders. “We fear the possibility that someday our fish may be unsafe to eat and that our water may be unsafe to drink,” he said, calling for redoubled efforts to eliminate the threat of nuclear radiation.

On his third transboundary harm, climate change, he said that even as he spoke, people were suffering from its impacts. As corals died, shores eroded and waters rose, and people felt helpless — and hopeless. No solution was in sight for that man-made problem. He further regretted that, even as the world neared the twentieth anniversary of the signing of the United Nations Framework Convention on Climate Change next year, little progress had been made, and the world was still without a binding agreement, while sea levels had risen and emissions continued unabated. However, even with all those obstacles hampering progress, he declared leaders of the Pacific States would not be deterred.

With that in mind, Palau and the Marshall Islands would call on the General Assembly to seek, on an urgent basis, pursuant to Article 96 of the Charter, an advisory opinion from the International Court of Justice on the responsibilities of States under international law to ensure that activities carried out under their jurisdiction or control that emitted greenhouse gases did not damage other States. “We should find our guidance in the international rule of law. Nations must respect fellow nations. Whether from destructive fishing practices, nuclear radiation or excessive emissions, nations must work together and cease to cause transboundary harm,” he declared.