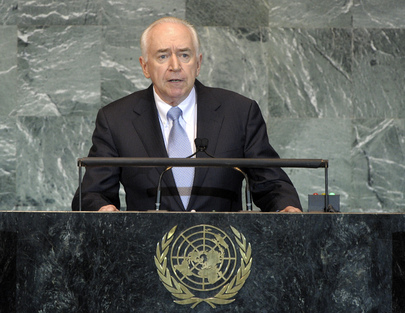 JIM MCLAY (New Zealand) said his country did not relish the prospect of being dragged into another recession that was not of its own making. Cautioning other larger States against repeating the mistakes of the 1930s when autarkic protectionism only deepened the global depression and led to war, he called for a successful conclusion of the Doha Round of trade negotiations, which would be a key to prosperity, particularly in the South. The earthquake that hit Christchurch on 22 February, followed closely by other disasters, such as the tsunami in Japan, reinforced the importance of effective disaster preparedness, response and recovery. No desktop exercise, disaster preparedness was a matter of survival. Likewise, he said, for New Zealand’s Pacific neighbours, climate change was a fundamental question of existence and posed a grave threat to livelihoods, security and well-being. Thus, all relevant international forums, including the Security Council, must play their part in addressing the climate change challenge. Urgent and effective action on emissions reduction was needed. Adaptation in developing countries must also be strengthened and security implications must be planned for before becoming larger threats. This year’s meeting in Durban must set the global community on the road to fully implementing the Cancun agreements. New Zealand was committed to integrating adaptation and mitigation measures into its development activities. It had also initiated the Global Research Alliance on Agricultural Greenhouse Gases to ensure that reducing agricultural emissions did not compromise global food security. New Zealand was also proud to be part of the Pacific Islands Forum, which was central for the region’s efforts to address its own problems, he said. The theme of discussions at recent celebrations for the fortieth anniversary of the Forum’s founding focused on strong, sustainable growth, protecting vulnerable populations and ensuring that the peoples of the Pacific region were healthy and educated and able to live long lives. The Forum also focused on sustainable development and called for next year’s Rio+20 conference to recognize the Pacific’s economic and environmental significance, as well as its contribution to sustainable development. Rio+20 must also support the “blue economy” concept. Turning to security matters, he underlined the need for greater progress on the disarmament agenda through the full implementation of the action plan agreed at the 2010 Review Conference of the Non-Proliferation Treaty (NPT) and further progress on the arms trade treaty. Calling for the Security Council’s reform, he recalled New Zealand’s intention to seek a non-permanent Council seat for the 2015-2016 term based on its belief that “States, large and small, have a place at the Council table.”