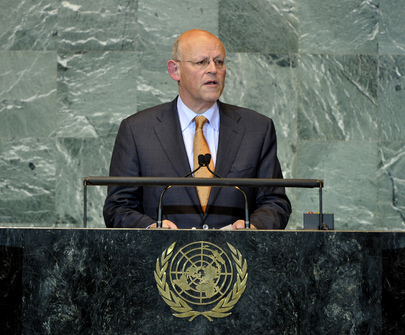 URI ROSENTHAL, Minister for Foreign Affairs of the Netherlands, said that the call for freedom and democracy form the streets of the Arab world had sparked great change. While the events in the Middle East and North Africa had inspired people far beyond that region to claim their rights, many challenges remained, especially fallout from the financial and economic crisis, which was threatening global trade and undermining livelihoods and social progress. The United Nations and the wider international community must support people’s calls for freedom, he said, noting that, along with the financial crisis, lack of security was another threat facing many regions.

He said providing security was a shared responsibility of Governments and the United Nations. The world had risen to that challenge in March when the Security Council adopted resolution 1973 (2011) on Libya, which explicitly referred to the “responsibility to protect”. By contrast, the Council’s failure to reach consensus on the situation in Syria “has come at great human cost”. Everyday, the world was shocked by “new horrific stories”, he said, declaring: “We need to stop President Assad’s Government from brutally murdering [its] own citizens in an attempt to crush their legitimate right to freedom.” He urged all members of the Security Council to act decisively and agree on targeted sanctions against that regime.

He said freedom and security were at the heart of the Middle East peace process, and if everyone wanted peace, “we need direct negotiations now, not new resolutions at the United Nations”. The Netherlands endorsed the time frame outlined late last week by the diplomatic Quartet on the Middle East peace process, and stood ready to provide any assistance it could. The Netherlands supported the ambition of the Palestinian people to build a viable independent State, as it supported the need to ensure Israel’s security. Both sides must invest in mutual confidence-building and refrain from taking unilateral steps.

Turning to matters regarding democracy and the rule of law, “which require hard work”, he called again for the United Nations to support those that were showing tremendous courage to claim their individual liberties and fundamental rights. The Organization should support efforts to build truly democratic societies, including through institution-building. He noted that Slovakia and the Netherlands were co-chairing the Community of Democracies Task Force, which was supporting Tunisia’s democratic transition. He called for all nations to strongly support the growth of and access to the Internet. Such access should be uncensored and made widely available in all societies. “Freedom offers the best route to prosperity; it belongs to all of us,” he said, calling for the speedy creation of an environment that was truly enabling for free trade and market access. Well-regulated free trade benefited all, and that was why the Doha Development Round of the World Trade Organization talks must be wrapped up as soon as possible.