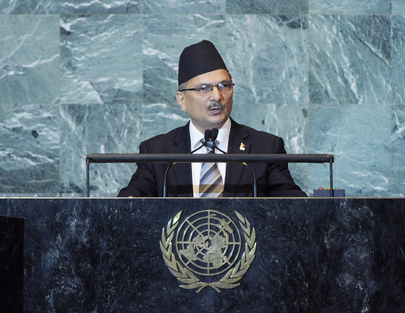 BABURAM BHATTARAI, Prime Minister of Nepal, said that his country was undergoing a momentous transformation. Indeed, following a period of persistent struggle, a “feudalistic and autocratic monarchy has been abolished”. Nepal had entered a new era with the creation of a federal democratic republic, and today, the new State apparatus was striving to take into account the country’s multi-ethnic, multilingual and multicultural diversity. The ultimate aim was to abolish all discrimination and oppression based on class, gender, nationality, religion and caste, and to create a just and democratic system.

He paid tribute to the ultimate sacrifice of thousands of martyrs in the historic 10-year People’s War that had begun in 1996, People’s Movement of 2006, the Madhesh Movement and many other oppressed peoples movements that had helped lay the foundation for Nepal’s rebirth, and pledged to consolidate those historic gains towards establishing peace and stability for all. The Government was committed to achieving that end by concluding the peace process and writing a new constitution. The new constitution would not only guarantee fundamental democratic norms and values, but would also ensure that Nepal’s multiparty democracy was inclusive and participatory. It would pay particular attention to the “oppressed, labouring masses and marginalized [people].”

He went on to say that Nepal’s homegrown peace process and historic transformation could provide excellent examples for others. “We believe that transformation must be holistic to have long-lasting impact at the grassroots [level],” he said, explaining that such transition must include improvements in the political, social and economic spheres, and be based on dialogue and consensus building. While Nepal, like other countries, had suffered “transitional pains and delays,” it had remained united behind a vision to complete the process by striving for consensus among all political parties and stakeholders. On another matter, at a time when humanity was so much in need of peace, he appealed for the development of Lumbini, the birthplace of Buddha, as “the fountain” of world peace. In that regard, the International Committee for the Development of Lumbini needed to be reactivated as soon as possible.

While the United Nations upheld the noble vision of peace, security, development and justice for all, “we have a long way to go to achieve this,” he continued. Conflicts still raged; deprivation deepened and sustainable development was denied to people all over the world. Calling for a focus on the root causes of such ills, he urged the United Nations to come up with a new and far-reaching development package. The world needed a new “Marshall Plan” for rebuilding post-war societies and promoting “bold, visionary steps” to ensure lasting development and peace. The least developed and landlocked countries faced severe structural constraints that hindered their development efforts, requiring specific attention, particularly in areas such as trade and infrastructure development. Moreover, such countries, including Nepal, faced challenges posed by labour migration, dependence on remittances and climate change, and he urged that the economic transformation of the least developed countries be placed at the top of the United Nations agenda.