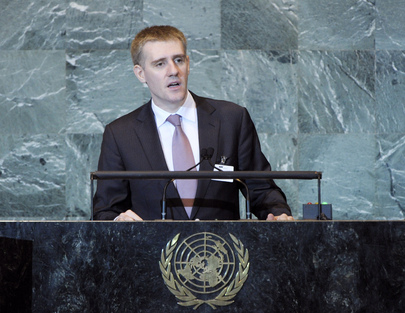 IGOR LUKŠIĆ, Prime Minister of Montenegro, congratulated South Sudan on its independence, noting two months ago it replaced his country as the youngest Member of the Organization.  He also supported democratization processes in North Africa, as well as actions by the Organization and the African Union for progress on other parts of the continent.  Within its own region, Montenegro contributed to South-East Europe’s stability by chairing its most important regional initiatives.  Montenegro’s commitment to internal reform was a solid foundation for the European Commission to recommend opening European Union accession negotiations with his country.

Montenegro was also preparing a plan for NATO (North Atlantic Treaty Organization) membership, since progress in Western Balkan integration with Europe and the Euro Atlantic region was key to regional stability and long-term economic prosperity.  His country participated in the peacekeeping missions in Liberia and Cyprus, the NATO mission in Afghanistan, global efforts against terrorism and Operation ATALANTA against piracy, but it was necessary to strengthen the Organization’s preventive diplomacy and mediation activities.  Accordingly, Montenegro strongly supported peaceful resolution of all conflicts, especially those in the Middle East and North Africa.

An Israel-Palestine peace agreement in their mutual interest was a priority, he said.  “If both sides refrain from violent actions, room will be created for confidence-building and a comprehensive solution to the Middle East issue, making Israel a safe country, to the benefit of both internationally recognized sides, and creating prerequisites for Palestine to establish a stable state,” he said.  Montenegro also supported all actions by the international community aimed at stopping human rights violations and fulfilling legitimate aspirations of populations in Libya and Syria.

As a supporter of the principles of universality of all human rights, Montenegro was standing as a candidate for the 2013-2015 Human Rights Council, and believed the Universal Periodic Review represented an important instrument that should be strengthened.  But, modern pragmatic reforms, such as strengthening the role of the General Assembly and enhanced representation of the Security Council with another non-permanent seat to the Eastern European Group, were needed.  The One United Nations Initiative was an opportunity to achieve more efficient results implementing national priorities, he said.

The United Nations Conference on Sustainable Development in Rio next year represented an important opportunity to cooperate for sustainable development and evaluate its progress over the past two decades.  As a member of the United Nations Sustainable Development Commission from 2011 to 2014, Montenegro was committed to the success of the Conference.  “There are numerous potential negative effects of climate change on Montenegro:  increase in sea level, temperature and impact on biological diversity,” he said.  The fight against climate change required a global, coordinated and decisive international agreement, based on the United Nations Framework Convention on Climate Change and the Kyoto Protocol.