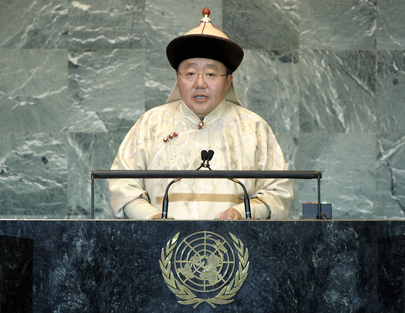 ELBEGDORJ TSAKHIA, President of Mongolia, emphasized the imperative of ensuring that the Millennium Development Goals were met on time.  A post-2015 development agenda integrating developing countries into the world economy — taking into account the vulnerabilities of those that were landlocked and susceptible to desertification and climate change — must also be formulated.  Every sixth Member State was a landlocked developing country, remote from world markets and saddled with high transport costs, he noted, stressing that all relevant parties must sign and ratify the Almaty Programme of Action, which was vitally important to countries facing impediments to their development, he said.

The Assembly had reviewed the Millennium Development Goals in 2010, yet significant gaps remained in commitments to aid, trade, debt relief and access to new technologies, he said, noting that his country could realize 66 per cent of the Goals by 2015, but targets on poverty, environmental degradation and gender inequality were “seriously off track”.  In the face of that challenge, Mongolia had implemented poverty-related initiatives such as a nationwide movement to stop alcohol abuse.  “With a view to encouraging such movements in other countries, it might be useful to look into the possibility of developing an international convention aimed at reducing alcohol consumption,” he said.

Underlining the vital importance of financial assistance to developing countries, including his own, for building capacity in energy production, construction and agriculture, he said that, being highly susceptible to the impact of climate change, Mongolia supported global efforts to combat its negative effects and would host the 2012 Asia-Europe Meeting (ASEM) Environment Ministers’ Conference on Sustainable Management of Water and Forest.  In July this year, the country had assumed the duties of President of the Community of Democracies, and would use the role to promote democracy education, good governance and the elimination of corruption, while building partnerships with civil society and consolidating regional cooperation.

Over the past 20 years, Mongolia had fundamentally transformed its political, social and economic systems, he said, stressing that, while it was proud of those accomplishments, it was fully aware that more must be done to nurture democratic values.  To address challenges to democracy and open society, the Government was implementing Mongolia-specific Millennium Development Goal 9, on democratic governance, human rights and zero-tolerance to corruption.  “Bad governance is the worst problem of all,” he said.  “Therefore, any aspiration to improve and streamline such governance ought to be strongly supported at all times.”  He hailed the revolutions of the Arab Spring but noted that there would be much work to do in establishing democratic systems.

He went on to underline that the Organization’s main purpose was to settle disputes by peaceful means, pointing out that North-East Asia was a region where mediation activities could be vigorously pursued.  Mongolia’s proposal to set up a permanent mechanism to promote peace and stability in the region remained valid, he said, adding that his country remained strongly committed to the activities of the United Nations.  Mongolia would present its candidature for a non-permanent seat on the Security Council in 2023-2024, at the elections to be held during the seventy-seventh session of the General Assembly, he said, adding that he was humbly seeking the valuable support of fellow Member States.