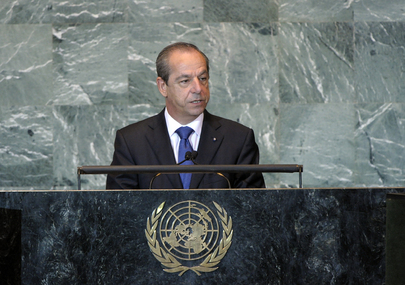 LAWRENCE GONZI, Prime Minister of Malta, said over the past 12 months, the world had witnessed continued upheavals and crises compounded by food insecurity in Africa, and exacerbated by drought and famine, which threatened the survival of millions of people, particularly in Somalia and the rest of the Horn of Africa.  Malta continued to channel most of its foreign humanitarian aid into the Horn of Africa.  It also contributed to the Central Emergency Response Fund to assist those in need in that region.  Within its limited resources, Malta had financially helped non-governmental organizations and individuals carry out school, clinics, housing and other development projects in developing and least developed countries.  He called on the United Nations to address the influx of illegal immigrants flowing into Malta due to the crises in Libya and North Africa.

“We continue to call for international solidarity and burden sharing in dealing with this phenomenon,” he said.  He expressed hope that the European Union’s Asylum Support Office, which opened in Malta in June, would help streamline European Union asylum policies and improve cooperation among authorities.  During Libya’s current turmoil, Malta, earning its title as the “Nurse of the Mediterranean”, had served as a safe haven for thousands of Libyan refugees.  In past months, Malta had provided a humanitarian hub to evacuate 20,000 people, as well as medical and other relief aid, to the World Food Programme (WFP) and other intergovernmental and non-governmental organizations aiding Libya.

He welcomed the National Transitional Council’s approach in recent weeks to enhance its standing and legitimacy, and its determination to ensure that justice, not vengeance, was pursued in Libya, he said.  National reconciliation, underpinned by full respect for human rights and fundamental freedoms, in Libya must take hold as soon as possible.  He welcomed the Libyan delegation as the “new and rightful” representatives at the United Nations.  “At this defining moment, the Libyan people deserve the fullest international solidarity on the political, economic and financial fronts,” he said.  He supported United Nations leadership and endorsed the Organization’s action programme in Libya based on Libyan national ownership, rapid response and delivery, and effective coordination.  Closely coordinating support efforts, especially with the European Union, would be crucial during Libya’s post-conflict period.

Egypt’s and Tunisia’s democratic reform processes deserved support so that they could be sustained politically and economically, he said.  As the people of the Middle East and North Africa embarked on a path of freedom and prosperity, it was necessary to help fulfil the long-sought aspirations of the Palestinian people.  The dramatic events unfolding in the Arab world made progress on the Israeli-Palestinian track even more urgent.  “No effort should be spared” to bring both sides back to the negotiating table.  Agreement on the parameters for negotiations would clearly be a step in the right direction.  He fully supported the European Union’s efforts to make that happen.  The conclusions of the European Union’s Foreign Affairs Council provided balanced parameters to resume talks.

He strongly condemned terrorism and pledged to work with other Member States to ensure terrorist acts were not only condemned in absolute terms, but also suppressed.  Unfolding events in North Africa highlighted the need to protect and promote human rights worldwide.  He said Malta intended to present during the Assembly’s 2012 session the draft Universal Declaration of Human Responsibilities, a document which he had first proposed in 2009 to complement the Universal Declaration of Human Rights.  Malta had made environmental sustainability a priority.  It was working towards a successful outcome at next year’s Rio+20 conference.  Malta also contributed to the Climate Change Fund.