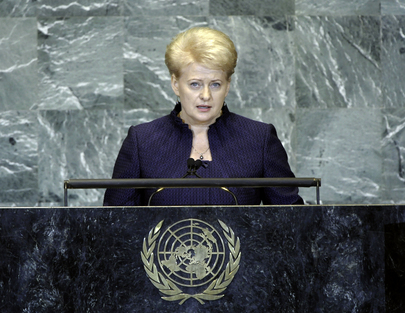 DALIA GRYBAUSKAITĖ, President of Lithuania, said that 20 years ago, Lithuania had rejoined the community of sovereign states and become a member of the United Nations. That peaceful transition, State-building and reform had made the country stronger and more determined. History had taught that an honest broker was the key to solving almost any problem, and in recent years, Lithuania had invested in its capacity to become such a broker. Having just concluded its chairmanship of the Community of Democracies, it was now proud to chair the Organization for Security and Cooperation in Europe (OSCE).

She said she was confident that Lithuania’s commitment to effective multilateralism and international cooperation made it a deserving candidate for non-permanent membership of the Security Council. “We are ready and determined to run for the Security Council’s non-permanent seat for the 2014-15 period.” She similarly assured delegations that her country would “do its utmost to contribute effectively and wisely to the work and principles of the United Nations in any of its bodies.”

A few months ago, women leaders from all parts of the world met in Vilnius to share their experiences on enhancing democracy, confirming her belief that women’s involvement remained very low in addressing common problems and concerns. Lithuania, therefore, strongly welcomed the resolution on peace mediation proposed by Finland and Turkey, adopted by the General Assembly, which advocated a stronger role for women in peace mediation. “The full involvement of women in conflict resolution, peace talks and decisions on reconstruction is essential,” she said, adding that the same applied to protection of women in conflict situations as defined in the historic Security Council Resolution 1325 (2000).

She said that the Secretary General’s call for a stronger connection between nuclear safety and nuclear security was especially appreciated. It was a common responsibility to create strict legal international imperatives for nuclear energy, without any compromises on safety and security, and she called for an ambitious nuclear safety action plan to be approved at the ongoing General Conference in Vienna. “Each and every nuclear power plant, its site, nuclear technology, and even the ability of the personnel to ensure safety maintenance should be subjected to stress tests. Last but not least, information about all existing and planned nuclear projects must be absolutely transparent and open to public access,” she said.