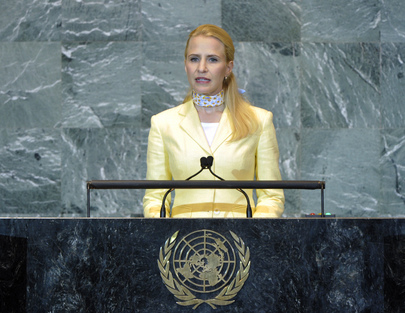 AURELIA FRICK, Minister for Foreign Affairs of Liechtenstein, said it was an honour and an inspiration to be speaking at the first General Assembly ever to be opened by a woman. She expressed encouragement for all those, women and men, young and old, who had been standing up for their rights, often at great personal risk. She welcomed South Sudan as the 193rd Member State of the United Nations, noting that the Organization had yet again proven its ability to settle complex and violent conflicts by peaceful means. Developments in Northern Africa and the Middle East had their roots in the disconnect between Governments and people, and were internal in nature. However, the rapid changes being witnessed also had an important international dimension. Events since February 2011 had put the United Nations to the test, and further challenges lay ahead.

She said the Organization had indeed advanced in developing the concept of the responsibility to protect, based on three “pillars” — the first two being that the responsibility to protect lay with the affected State and that other States had the responsibility to assist in that protection. However, when it came to the third pillar, the international community needed to become more active. She commended the swift actions of the Security Council to protect the civilians of Libya and Côte d’Ivoire. While some had criticized those actions as a choice aimed at regime change, she stressed that it was those regimes that had chosen to attack civilians and forced the international community to act.

On the subject of whether or not the United Nations had lived up to its promise of “never again” given in the aftermath of Rwanda and Srebrenica, she said that the action taken in regard to Libya had been a “historic” decision. The international community had responded with swift action, and was also undertaking preliminary investigations regarding Côte d’Ivoire. However, accountability had not yet arrived everywhere it was needed. International mechanisms such as the International Criminal Court could and must only become active where States failed to live up to the task. In the peaceful settlement of disputes, mediation had proven to be an effective tool and should be given higher priority, especially with regard to peacekeeping operations. She welcomed the new focus on the role of women brought about by the creation of UN Women. Further, she placed “high hopes” in the new monitoring system to protect women and girls from sexual violence.

The root causes of unrest in countries needed continued attention, as economic and social development were intricately linked with good governance, human rights and the rule of law. She said the events of recent months had shown how irresistible the call for freedom could be. Despite all criticism, the United Nations had become more effective in delivering its mandate.