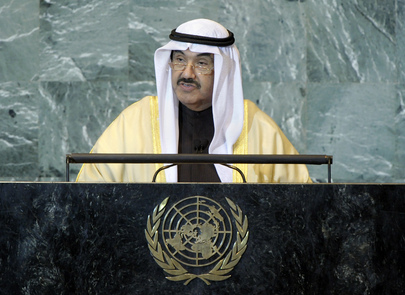 SHEIKH NASSER AL-MOHAMMAD AL-AHMAD AL-SABAH, Prime Minister of Kuwait, said the role of the United Nations had broadened, now encompassing humanitarian aid, most recently in the Horn of Africa. The United Nations ever-increasing importance had necessitated improving and strengthening its capabilities, and steps were needed to reform its major bodies, including the Security Council. All Member States had a responsibility to support the Organization; its power, ultimately, was but a reflection of the support of its members for its noble objectives.

On peace and security, he said, the Middle East was of great concern. The legitimate demands for implementing serious and prompt political, economic and social reforms must be heeded. In that regard, Kuwait supported dialogue and a rejection of violence. The country also believed in mutual respect among neighbouring nations, and in that, called on Iran to take “serious and real” confidence-building measures represented by adherence to resolutions of the International Atomic Energy Agency (IAEA) to dispel fears and doubts surrounding its nuclear programme.

Noting the fiftieth anniversary this year of Kuwait’s independence, he said that also marked the twentieth anniversary of its liberation from Iraqi occupation. That was one of the most outstanding successes of the United Nations in its endeavours to deter aggression and remove its effects. However, after six decades, the United Nations was still unable to find a solution to the Palestinian question and putting an end to Israeli occupation of Arab territories. The international community was required to continue its efforts to pressure Israel to enable Palestinian people to obtain their right to self-determination. He renewed his country’s full commitment and support to the Palestinian Authority’s bid to obtain membership in the United Nations as an independent and full Member State.

He said developing and least developed countries suffered the most from the economic crisis, which had caused a deceleration of economic growth, a decrease in export volume, and a rise in unemployment. The price of foods and basic commodities had also risen. The international community must forge ahead in restructuring the international financial institutions to, among other things, be more representative and fair to the countries that needed their support. There was a dire need for a just and balanced global trade system that bridged the enormous gap between States, as well as to assist poor economies in integrating into the global economic system. ODA pledges also must be honoured. Despite the fact that Kuwait was a developing country, it had provided $15 billion since its independence for humanitarian and development assistance in more than 100 countries.

The United Nations, he concluded, had been able to unite the world’s visions, guide its endeavours and mobilize its resources and potential to consolidate joint work to combat corruption, strengthen the rule of law and good governance, respect human rights, and empower women. He looked forward to a more effective international role within the context of the Alliance of Civilizations initiative to intensify dialogue between various civilizations, religions and cultures, disseminate the values of tolerance, moderation and mutual respect, as well as reject the expressions of violence and extremism, which undermined and reduced chances of working together to spread the culture of peace and reach the noble principles and purposes of the United Nations Charter.