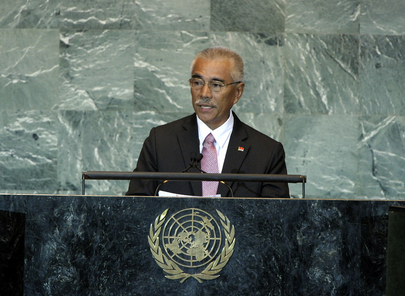 ANOTE TONG, President of Kiribati, said natural and human-induced disasters had been the cause of great suffering in different regions, while countries and peoples faced all kinds of security threats from armed conflicts, terrorism, human trafficking, economic recession as well as the impacts of climate change. As a result, many communities suffered increasing poverty, hunger and dislocation. Was the United Nations, in its current form, equipped to deal with those emerging issues, or was it time to review the structure and effectiveness of the international governance system? he asked.

Indeed, the lack of progress on climate change negotiations clearly demonstrated the wide divergence of positions on that issue, he pointed out. Unless any future mediation could be approached with trust and commitment, the world would be caught in a vicious cycle in which the obsession to protect whatever was perceived as a critical national interest would win out, he warned. Thanking the Secretary-General for his comments about Kiribati in opening the general debate, he said they were a powerful endorsement of what the most vulnerable countries had been saying for years. Hopefully it would communicate to all the need for urgent action on climate change, which was already proving to be a curse for a few nations.

While some would argue that climate change did not fall within the conventional definition of a security threat, that was only because it was not yet such a threat for them, he pointed out. In Kiribati, many young people went to sleep fearing what could happen to their homes overnight. Indeed, the accelerated and continuing erosion of Kiribati’s shorelines was destroying settlements, forcing some communities to relocate even as he spoke. Despite ongoing negotiations to find amicable solutions to the threat, the pertinent question was how long the world would continue to argue, he said.

As the world converged on Rio+20, the Government of Kiribati hoped it would embark on bold and innovative initiatives to address climate change. Noting the apparent common ground on the issues to be discussed at this year’s climate change meeting in Durban, South Africa, he nevertheless asked what point would be made by reaching consensus if no concrete action followed. Kiribati had finally been persuaded to associate itself with the Copenhagen Accord — despite its misgivings over that agreement’s serious shortcomings — on the premise that doing so would trigger the flow of pledged adaptation funds, yet it continued to wait for those funds today.

Stymied by external factors in its attempts to meet its sustainable development goals, and worried that the impacts of climate change would progressively dominate its national agenda, he said Kiribati was unsurprisingly off track in its quest to realize most of the Millennium Development Goals. It was therefore imperative to mobilize climate change adaption funds to free up development resources that could otherwise be diverted to the most urgent adaptation needs. Furthermore, the Green Climate Fund should be made operational as soon as possible, he said, adding that all nations and peoples contributing to climate change, including Taiwan, should be part of the solution.