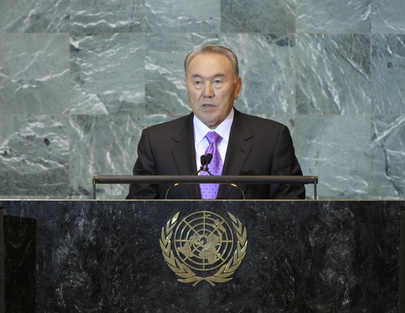 NURSULTAN NAZARBAYEV, President of Kazakhstan, said that this year, his country would celebrate the twentieth anniversary of its independence and it would, as it always had, continue to carry out the letter and spirit of the United Nations Charter.  Among other things, Kazakhstan had shut down the Semipalatinsk nuclear test site and, in the process, had become one of the world’s first newly independent non-nuclear-weapon States.  The Government had also succeeded in convening the Conference on Interaction and Confidence-building Measures in Asia, which it had proposed some 19 years ago.  It had also succeeded in holding a Summit of the Organization for Security and Cooperation in Europe (OSCE), and had assumed an important mission, that of Chairmanship of the Organization of Islamic Cooperation (OIC).  In that endeavour, Kazakhstan had focused on international and regional security, dialogue between the Islamic world and the West, and the efforts to counter “Islamaphobia” and enhance non-proliferation regimes.

He said that after the break-up of the Soviet Union, Kazakhstan had been able to press ahead with reforms and economic growth.  In the past two decades, it had posted a 14-fold increase in per capita gross domestic product (GDP), from about $700 to $10,000.  His country had also called for the adoption of a global energy and environment strategy and, to that end, had put forward an ambitious “Green Bridge” environmental initiative.  His delegation planned to bring those ideas to Rio+20 next June.  As for today, the world was entering a critical phase, as humanity harnessed powerful sources of energy, but was powerless against the forces of nature.  Pockets of poverty and destitution were popping up even in the wealthiest countries, and it was becoming harder and harder to contain outbreaks of ethnic and religious intolerance.

Although the world had come together a decade ago in the wake of the tragic terror attacks of 11 September, “no conclusive lessons have been learned from [these events] and the recurrence of international terrorism is on display in different parts of the world,” he said.  As Member States proceeded with their work in the coming weeks, Kazakhstan hoped they would assiduously tackle those and other pressing challenges.  Among the key areas for action, he cited the need to address global nuclear safety and security and called for nations to begin drafting a universal declaration on a “nuclear-weapon-free world”.  Kazakhstan considered that all States that belonged to the “nuclear club” should join the process of reducing their arsenals, in light of the agreement between the United States and the Russian Federation.  That was essential because today such weapons were not a deterrent, but catalysts for an arms race.

Turning to global finance, he said the key aim should be to reform relevant United Nations and other international financial bodies to predict economic crises, head them off and eliminate their causes.  It was generally agreed that the current economic and financial turmoil had been caused by deficiencies in international mechanisms, yet, no real steps had been taken to address the flaws that were at the heart of the downturn.  “Procrastination in tackling this issue will only result in new violent waves of the crisis and a surge in regional and global instability,” he said, calling for the early establishment of an effective global economic governance mechanism, with clear powers and lines of accountability for all actors and institutions.

He also called for action on a host of other challenges, including global hunger and water scarcity, and in protecting the “information space,” which was as important for the future of humanity as the aquatic world and outer space.  He was concerned that no international treaty or convention to that end was being considered.  A resolution on the nine elements of a global culture of cybersecurity adopted by the General Assembly in 2002 was a sound basis for moving forward on elaborating such an instrument.  He also called for action to prevent and end conflicts.  At the same time, it was important to note that the principle of sovereignty and territorial integrity was “often exposed to erosion,” which could undermine trust among nations.

It was essential, therefore, to upgrade national legal norms concerning State sovereignty, taking into account new realities and clearly defining the bounds beyond which the international community’s involvement in the settlement of internal conflicts was warranted.  “Global peace will only be enhanced if the United Nations works closer with regional security arrangements,” he continued, citing such organizations as the Shanghai Cooperation Organisation and the Collective Security Treaty Organization.  On other matters, Kazakhstan had announced its candidacy for a non-permanent seat on the Security Council for 2017-2018.  On the “complex” question of Palestine, he said that difficult issue had been placed on the scales of history, and Kazakhstan advocated a just and lasting settlement of the conflict, including direct Israeli-Palestinian talks.