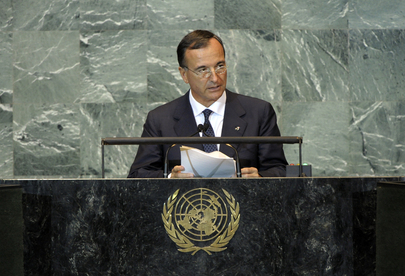 FRANCO FRATTINIA, Minister for Foreign Affairs of Italy, said that in celebrating the 150th anniversary of Italian unification this year, he stressed his country’s long tradition of mediation, which served to bridge the gap between aspirations for independence and the reality of foreign occupation. For decades, Italy had emphasized the need to bridge the economic and social gap between the conditions of the northern shores of the Mediterranean and the expectations of the neighbours to the south. Despite that vision, the aspirations of the peoples of the Middle East were often overlooked. The Arab Spring had been a wake-up call for the world that no political leader could maintain power at the expense of his or her people.

He said that while Italy had called for dialogue and deplored the use of force against civilians, that had not been enough in Libya, whose regime had vowed to slaughter its own civilians. The only way to prevent a massacre had been to invoke the principle of “responsibility to protect”. By helping to implement that decision in military, diplomatic and humanitarian terms, the international community had shifted from a culture of “sovereign impunity” to one of “responsible sovereignty” rooted in national and international accountability for the most serious violations of human rights.

The uprisings in North Africa and the Middle East sent a message that the United Nations could do more and do better, he said. His delegation was not calling for less United Nations involvement — it was asking for more. Libya could be the first test case for a more prominent United Nations role, and the Organization should therefore chair the international coordination mechanism with the support of the Arab League, African Union and European Union, among others.

We went on to say that the world’s humanistic heritage defined the human being as the measure of all things. The principle of placing people first underpinned Italy’s active support for United Nations campaigns on fundamental issues, such as the abolition of the death penalty, the protection of freedom of religion or belief, and others. Italy also placed the rights of human beings and the environment at the centre of society, and would endeavour to create and consolidate a “modern humanism”, as there could be no better defence against the hatred and criminal intolerance that had struck New York, the United States and the world 10 years ago.