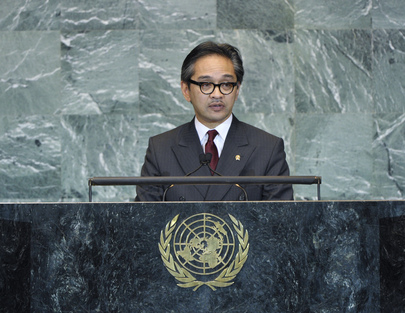 MARTY NATALEGAWA, Minister for Foreign Affairs of Indonesia, said the General Assembly must seek to do more than just relive the past, lament on opportunities lost and congratulate on gains made. Rather, it must ensure that moving forward, Member States of the United Nations were just that — united — in their efforts to address and anticipate the challenges ahead. The opportunity existed to promote a new kind of international relations that accentuated partnership rather than confrontation, and placed primacy on the building of bridges, rather than the deepening of fault lines and divisions. Nations should aggressively “wage peace and development”.

He said that “waging” peace in the Middle East must first and foremost entailed the correction of an historic injustice against the people of Palestine that had been allowed to go on for too long. In that regard, Indonesia strongly supported Palestine’s present quest for full membership in the United Nations. Such membership was consistent with the vision of a two-State solution, and of a just and comprehensive peace in the Middle East.

Welcoming the democratic transformations in North Africa and the Middle East, he said that conditions must be promoted that were conducive for people to shape their own future. Thus, Indonesia supported the National Transitional Council in Libya to promote a peaceful and democratic transition. Indonesia had undergone its own democratization a decade or so ago, and was now reaping the dividends of such change. For that reason, his country had launched the Bali Democracy Forum — the only intergovernmental forum for the sharing of experience and cooperation in political development in Asia.

The role of women should be promoted when it came to achieving the Millennium Development Goals, which was not only right, but also smart. Overall, multilateralism should be strengthened, and cooperation and partnership between the United Nations and regional organizations was key to addressing today’s global challenges. As the chair of ASEAN, Indonesia was working ceaselessly to develop the region’s capacity to prevent and manage potential conflicts, and to resolve them. Such efforts were focused, not only on the further development of ASEAN’s conflict prevention and resolution, but in developing and nurturing necessary comfort level among ASEAN member States to resort to them. As the Association continued its central role in the region, it was also setting a new challenge for itself, namely to develop greater cohesion and a common platform on global issues.