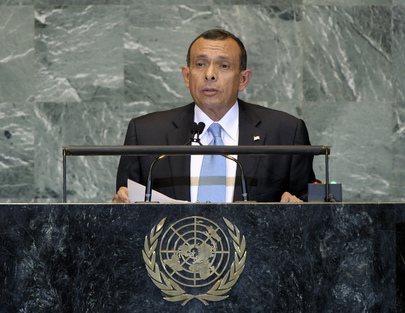 PORFIRIO LOBO SOSA, President of Honduras, said the United Nations was still the best venue for efforts to further the well-being of humanity, adding that all peoples had a right to their own territories and traditions.  In that context, Honduras had recognized Palestine as a State and looked forward to a negotiated settlement of the Middle East conflict on the basis of the two-State solution, corresponding to the needs of the two peoples involved.

Recalling that his country had experienced its own deterioration in human rights after the events of 2009, he said his administration was focused on consolidating peace on the basis of social justice and a stronger democracy.  He thanked the leaders of Colombia and Venezuela for their help in ensuring the return of Honduras to the Organization of American States, and said that inclusive dialogue was now taking place to allow all groups to participate in reforms for a better future.  The Secretariat of Justice and Human Rights had advised on that process, and Honduras now had a national action plan on human rights.  The Truth and Reconciliation Commission had completed its tasks and presented its recommendations to ensure that the disruption of human rights would never be repeated.

Regarding the global economic and financial crisis, he said all sectors had been consulted on the creation of a national plan for equitable economic growth, salaries and productivity.  Widespread reform of the education system and the provision of equal opportunities for all were also priorities.  In addition, a family help programme hoped to reach about half of the country’s families by 2012, and a nutrition-assistance programme was also under way.  As for sustainable development, Honduras was involved in shark-preservation programmes and had signed instruments on reducing global warming and controlling chemical products.

Expressing support for all measures to preserve the global environment based on the Rio principles, he called on the United Nations to expand those principles to better serve the needs of the world’s populations, including indigenous peoples and those of African descent, adding, in that regard, that Honduras had ratified the International Convention on the Elimination of All Forms of Racial Discrimination and celebrated the international commemorations instituted for people of African descent.  He also called for a decade dedicated to indigenous peoples, and for a permanent forum for African peoples within the United Nations.

One of the biggest challenges facing Central America was insecurity due to drugs and organized crime, he said, adding that the twin menace had made the subregion the most violent in the world.  The economy of Honduras had been seriously harmed as murders, kidnapping, money-laundering, and trafficking in people and arms, as well as sexual exploitation of women and minors, posed a serious threat to the population, society and development.  Much of that activity was related to drugs, he said, adding that the subregion’s countries were investing large sums in combating their production and supply.  However, the traffickers adapted to those efforts, and there was a need to build the capacity to investigate all such crimes and bring the perpetrators to justice.  Consumer countries must be courageous in reducing demand, he emphasized, adding that coordinating all strategies was critical to ending the threat.