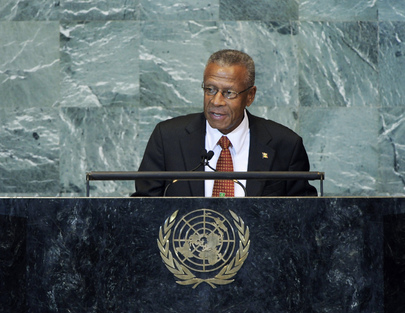 TILLMAN THOMAS, Prime Minister of Grenada, said the United Nations was meant to lead, perhaps more so in difficult times, noting: “We all are obliged to work selflessly to preserve our planet.” In the last year, the world had witnessed many challenges that undermined stability. The economic crisis continued to weigh heavily on Grenada in the form of high food and fuel prices, lower national revenues and high debt. Indeed, the green shoots of recovery had not reached the island, he said, adding that global instability anywhere hurt his country, as unemployment in the world’s capitals affected tourism and even remittances.

Urging growth with equity, especially for women and youth, as well as a just, peaceful and democratic global framework, he said Grenada had worked to strengthen democratic processes and advance Caribbean regional integration. At the national level, the Government had promoted social inclusion, while regionally, it was working with the Organization of Eastern Caribbean States (OECS) and the Caribbean Community (CARICOM).

With respect to sustainable development, he appealed to Member States to meet the commitments of the Durban meeting to be held in December, and Rio+20 to be held in June 2012. He said it was disappointing that some countries had blocked the review of 1.5° C as the potential global average temperature increase, and called for supporting a safe threshold for islands. This year, Grenada would launch a sustainable energy programme for 24 small island developing States, which would provide the basis for low-carbon economic growth, he said.

He went on to emphasize that a key outcome of Rio+20 must be the development of a green economy — combining investments and jobs with environmental resources — and a blue economy that took into account ocean-based income generation. On other matters, he said that the United Nations, especially the Security Council, must be reformed to make it more representative and inclusive. The body should be expanded in both its permanent and non-permanent categories, and be more open in its working methods. Specifically, he called for a seat for small island States and stronger relations with CARICOM.