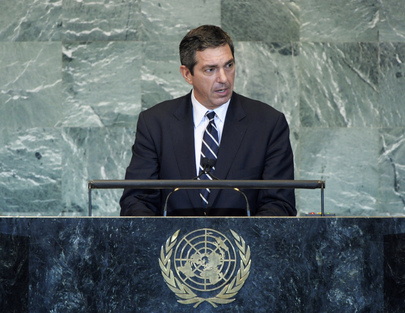 STAVROS LAMBRINIDIS, Minister for Foreign Affairs of Greece, said his country had a vision for peace, stability and cooperation in the Balkans, the key component of which was the European perspective of the region as a whole and of each individual neighbour. Pinpointing the Kosovo issue as a serious obstacle to the consolidation of peace and security in the subregion, he said recent progress in the European Union-brokered talks between Belgrade and Pristina was some cause for optimism in the wake of the recent tensions seen in the region. However, those tensions were not over, he warned, adding that they must still be dealt with and defused.

To that end, Greece wished to facilitate the process of reconciliation and compromise, he said. It also wished to foster the kind of understanding that its neighbours needed on the path to a common European future because that was a policy that worked. He said that another matter requiring his country’s attention was the “name issue” between Greece and the Former Yugoslav Republic of Macedonia. It was high time a successful, mutually beneficial conclusion was reached, he stressed.

Turning to the Arab Spring, he said his country had embraced a vital role in those developments, not only on account of its long tradition of trust and friendship with the Arab world, but also because of its proximity to the countries swept by calls for change. Consequently, Greece had conducted unprecedented evacuations of tens of thousands of people, provided ground support for the implementation of the no-fly zone over Libya, mediated for the release of European military personnel early in the crisis and established an early diplomatic presence in Benghazi to liaise with the National Transitional Council.

NICKOLAY MLADENOV, Minister for Foreign Affairs of Bulgaria, compared the scale of the historic change occurring in North Africa and the Middle East to that seen at the fall of the Berlin Wall and the end of communism. Although the processes were as different as the circumstances, the events shared their genesis in the need of the respective peoples concerned to break the bonds of corrupt leadership, deficient democratic processes and lack of opportunities.

Young people in those countries did not want to be forced to live in a world ruled by “ageing dictators”, he declared. “As change swept North Africa and the Middle East, some leaders cringed, others embraced it,” he said, noting that those who had opposed the will of their people were no longer in power and their countries were moving towards democratic elections. He called on President Bashar al-Assad to “come out from the shadows, dismantle the machinery of repression, and immediately call for internationally supervised elections”.

He said it was to Bulgaria and all those countries that had joined the European Union late — not by their own choice, but due to ideological divisions of the Cold War — to say it loud and clear: “To make war impossible in the Balkans we must see all countries that had emerged from the former Yugoslavia be part of the European Union. This is our historic mission. It is our destiny.” It was important that meetings between Serbia and Kosovo continue in a pragmatic fashion, and that the two sides engage in a constructive manner.