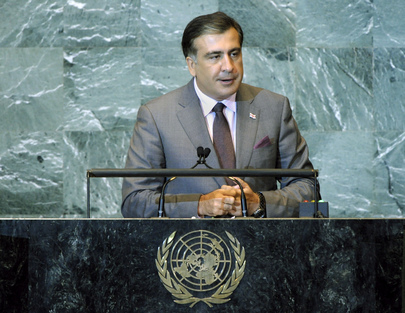 MIKHEIL SAAKASHVILI, President of Georgia, expressing surprise that no one had mentioned that this year marked the twentieth anniversary since the collapse of the Soviet Union, said that that event had heralded a new era of international relations, which some even called the end of history. Ten years later, however, September 11 had reminded everyone that the world was still a battlefield, and earlier this year, upheavals in the Arab world again proved that there was never an end to history. Indeed, the “highest heaven and the deepest abyss” were once again in conflict.

Calling the Soviet Union’s end a new beginning in which countries like his were confronted by both the best and the worst, he said those experiencing the best were quickly integrated into the European Union and NATO. Others, like Georgia, were left to far worse prospects, including becoming a failed State. The divergent paths facing the former countries of the Soviet sphere were exemplified by Vaclav Havel on one side, and Slobodan Milosevic on the other — men who embraced freedom and men who erected physical and mental walls.

He said that the Russian Federation’s military currently occupied 20 per cent of Georgia’s sovereign territory, in violation of international law. Displaced persons were denied the right to return to their houses because a foreign leader in Moscow had decided their home was no longer theirs. While Georgia continued to renounce the option of the use of force to rectify that situation, one year after it first made that pledge, the Russian Federation had not responded. It seemed that, while the cold war was over, brutal diktats were still used over Ukraine, Belarus and others, and the old Soviet habit of manipulating ethnic hatred was still at work. Nonetheless, Georgia was responding to military build-up by strengthening its infrastructure for the future.

Evoking Eastern Europe’s colour revolutions, as well as the recent Arab Spring, he said none of those events would have been possible if the Soviet Union still existed. Indeed, following a breathtaking act of desperation in Tunisia, the world had been turned upside down. Although such historical eruptions as the Arab Spring always came as a surprise, they were the best, most definitive answer to the attacks of September 11. Stranded in a geopolitical hole and left as a failed State, Georgia had discovered the lesson that would now apply to North Africa and the Middle East: that the real revolution took place only once the television cameras left.

Georgia, he said, had engaged in a permanent process of reform with real benchmarks. Among results of that reform, Georgia had made the greatest progress of any country on one international transparency index: it was now ranked by the World Bank as one of the easiest places in the world to do business. Other surveys singled out Georgia’s institution-building efforts, including its progress in curbing corruption. The double anniversaries of the Soviet Union’s fall and September 11 “continue to confront us with the central question: How can we assure that the new spaces opening in the world […] were filled by peace rather violence, by tolerance rather than extremism, by freedom rather than slavery.”