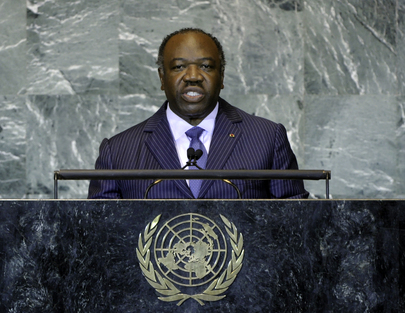 ALI BONGO ONDIMBA, President of Gabon, said that his country firmly believed in the link between peace and security on one hand, and development and democracy on the other. Because the people of Gabon lived in peace with their neighbours and the world, they were able to achieve new development objectives. Indeed, that link was the foundation of the vision for the future development of Gabon, which he had proposed upon taking office. Currently, Gabon was making progress on building its strategic infrastructure and was advancing the industrialization of its natural resources, starting with wood, manganese and natural gas. It also intended to develop its agricultural sector, which was critical to the country’s food security. Furthermore, the Government was working on a daily basis to implement its commitment to sustainable development through its “green Gabon” initiative.

Reiterating his country’s commitment to peace and security in Africa and internationally, he noted that it currently held a non-permanent seat on the Security Council and had chaired the Council in June. Gabon supported the Council’s actions on Côte d’Ivoire and believed the international community must now support the efforts of the country’s new authorities in national reconciliation and reconstruction. His Government had also recognized the National Transitional Council and rejoiced at Libya’s return to the African Union. Noting that Gabon had supported the adoption of Council resolution 1973 (2011), which was necessary to prevent a bloodbath in Benghazi, he said it was important that Libya emerge from the conflict and engage in national reconciliation with support from the international community.

Welcoming South Sudan as the newest member of the United Nations, he urged Sudan and South Sudan to find solutions to all post-referendum issues. It was also critical to find a way to get aid to the people of Somalia. Turning to the Palestinian issue, which he said affected the entire global community, he expressed the desire to see a Palestinian State living side by side with Israel, soon. He hoped that the mediation efforts of the Arab League would, with urgency, reach a peaceful and democratic settlement.

He went on to stress that any future Security Council reform must ensure that Africa had a permanent seat. That was part and parcel of the aspirations for genuine democracy of global political and economic governance. Expressing his country’s commitment to protecting the environment and combating global warming, he said it subscribed to the modern ways of protecting its tropical forests and its immense ecological wealth. At the same time, it was closely following the efforts to delineate the limits of the continental shelf. As developing countries struggled with limited resources to achieve the Millennium Development Goals, it was clear that a new global partnership for development was needed to ensure lasting economic growth. In that context, aid must be accompanied by more direct investment and fair and equitable trade.

Turning to the Assembly’s current theme, he said mediation formed one of the bases of Gabon’s approach to neighbourly relations, while the peaceful settlement of conflict was part of its obligations under several international conventions and agreements to which it was party. However, Gabon recognized that mediation had its limits, and as new forms of conflict emerged, his Government believed close attention must be paid as to how to resolve them. Finally, he stressed that women must be included in mediation efforts.