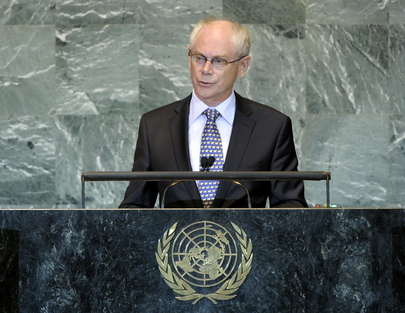 HERMAN VAN ROMPUY, President of the European Council, speaking on behalf of the European Union, said that the world had changed in the past year — in some ways that were worrying, and others “for the better”.  The Union saw hope in the fact that millions of people had recently climbed out of poverty in Asia, Latin America and Africa, transitioning from “emerging economies” to “emerged societies”.  It was hopeful that South Sudan, the United Nations newest Member State, had transitioned to independence.  And there was new hope, most of all, thanks to the will of the people in Northern Africa and the Middle East to take the road of democracy.  “We have seen the defeat of repression,” even if the fighting was not yet over.  The Union saw the Arab Spring as one of the most momentous political developments since the end of the cold war, and it hoped it would blossom.  It was assisting Arab revolutionaries with financial resources, market access to Union countries, mobility among those countries, and assistance for State- and nation-building.

Referring to the Security Council’s adoption of resolution 1973 (2011), he said that European Union leaders, together with others, facing the risk of a “bloodbath in Benghazi”, had acted swiftly and with determination, both diplomatically and militarily.  The “principle to responsibility to protect” had been put into action, and now there was a “responsibility to assist” Libya’s Transitional National Council — which today sat in the Libya seat in the General Assembly Hall — with the political transition, and the reconciliation and the reconstruction of a united country.  The Arab Spring taught several lessons.  When the horrific terrorist attacks in New York were committed a decade ago, many had feared the start of an era of religious hatred.  But, instead of extremism or a so-called clash of civilizations, the recent movements had been a fight for freedom and justice.  Those should remain the overriding objectives for the future.

Despite hope, however, there was also reason for worry, he said.  The European Union worried about the “brutal and ongoing repression” of its own people by the Syrian regime, and about the famine in Somalia.  It was concerned about wars and conflict, the safety of nuclear reactors, nuclear proliferation and the behaviour of the Iranian and North Korean leadership, as well as about climate change.  In the face of those concerns, he asked, “are we doing what we should be doing?”  The Union had taken up its responsibility to act.  It did so with means and money, with manpower — in the form of development workers, soldiers, policemen, and others, with a “sense of global common good”, and with expertise in mediation.

The Union’s position on the Palestinian-Israeli conflict was well known:  it included references to the 1967 borders with territorial swaps acceptable to both parties, he continued.  Moreover, the Union was financially supporting the State-building process by the Palestinian Authority.  “Now is the time for dialogue,” he stressed.  “There are political risks, but you need to take them,” he said of both parties, warning that “history is a severe judge for short-sightedness”; over time, it only rewarded political courage and statesmanship.  From the European experience, “a lasting compromise is grounded in mutual sacrifice and trust.”

Turning to climate change, he stressed that current efforts were insufficient.  “More needs to be done in words and deeds,” he said, starting at the Durban Conference on climate.  Europe was sticking to its commitments — delivering on emissions targets — and it invited the rest of the industrialized countries to do the same.  “Green growth” must be a rallying cry in countries big and small, rich and poor.  Europe was ready to help the most vulnerable nations, he added.

The “Eurozone” was now facing a sovereign debt crisis, but European leaders were taking decisions, individually and jointly, to bring the storm to rest, he said.  It did not just feel responsible for its own economies, but for the world economy, as well.  Europe would continue to do what was needed to safeguard the financial stability of the Eurozone by working on governance, fiscal discipline and financial integration.  It likewise expected the other major economies to take responsibility for their internal challenges.  “Each has to bring its own house in order,” he stressed, be it by bringing down its public debt, by stimulating domestic demand, or by aligning exchange rates to economic fundamentals.  In a world becoming increasingly globalized, Europe’s 500 million citizens continued to reject isolation.  “This world is our world.  It belongs to us all,” he declared.