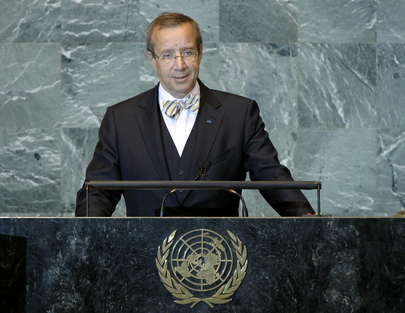 TOOMAS HENDRIK ILVES, President of Estonia, said his country’s transformation, after a half century of “thuggish” Soviet and Nazi occupation, into a modern technologically cutting-edge European democracy in just one generation was a testament to what committed people could do, as well as a challenge to those who found excuses for not implementing democracy, eliminating corruption and stopping the brutalization of their citizens.  Hope of liberty and democracy were in the air in the Middle East:  “again people have come together and said ‘Enough!’”.  Enough of the lies, the corruption, the 3 a.m. knock on the door by the dull-brained goons of the secret police,” he said.

He encouraged the United Nations to move forward on the Secretary-General’s decision to focus on democracy and human rights during his second term.  He lamented that most people living under undemocratic rule two decades ago continued to do so today.  Of the former Soviet Union, only Estonia, Latvia and Lithuania had earned the “free” designation in Freedom House’s annual report card on the rule of law, respect for fundamental freedoms, and free and fair elections.  That was a “poor result”.

It was fundamentally important that the North African and Middle Eastern revolutions had been popular reactions to sustained human rights violations, corruption and injustice, he said.  Ongoing revolutions could not occur or succeed without women, he said, worried that women were often welcomed to protest against corrupt regimes, but not always welcomed to participate in the political process.  Therefore, he placed great hope in UN Women and its role in putting into practice the principles set forth in Council resolution 1325 (2000) on women, peace and security.  Estonia would continue to insist that the Organization as a whole did its part to stand up for women’s rights.

Estonia had always protected and promoted human rights at home and abroad; its candidature for the Human Rights Council was a logical consequence of its work, he said.  Ongoing events underscored the need to focus on protecting civilians from atrocities.  It was vital to develop common practices and the capacity to implement the principle of the responsibility to protect.  That included bringing perpetrators of crimes against civilians to justice through international law and the International Criminal Court.

The international community must not shy away from addressing unresolved issues of the recent past, such as creating lasting security in Afghanistan by helping that nation further develop good governance and the rule of law, he said.  The world must remain committed as long as necessary to reach that goal.  Estonia would continue to support Afghans, especially women’s and children’s access to health care and education, through development cooperation projects.  Georgia, whose territorial integrity had been violated during the 2008 war, also required attention.  It was essential to continue to support the Geneva talks; the United Nations sustained involvement there was vital.

In the technological age, unimpeded access to the Internet was a human right, he said.  “Estonia’s development over the past 20 years is proof that information and communications technology can be a springboard to success for all States,” he said, pledging Estonia’s continued cooperation in sharing experiences with other countries, particularly regarding increased Government transparency and openness.  The Internet posed dangers, such as disruptive cyberthreats and attacks, but Estonia’s experience had shown that a proper balance between rights and security could be achieved without compromising either principle.

He said that climate change was also a security issue that could have a destabilizing effect, and Estonia would contribute to fast-track financing to combat it.  Sustainable development and the green economy needed a global approach.  As climate change had increased the number of people in need of clean water and food, Estonia would scale up its contribution to the United Nations humanitarian system.  As the world’s humanitarian needs grew, greater coordination and strict scrutiny of the real needs of aid recipients was vital.

On United Nations reform, he welcomed system-wide coherence, the “Deliver as One” concept and revitalization of the Assembly.  He called for the same spirit of reform in the Council and for a “new attitude of openness to new developments” so the Organization could better deliver on its mandate.