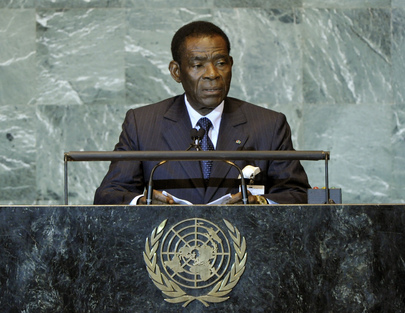 TEODORO OBIANG NGUEMA MBASOGO, President of Equatorial Guinea and Chairperson of the African Union, said that, thanks to the General Assembly’s 66 years of accumulated experience, the international community should feel itself “morally inspired” to deal with any threat or situation affecting the planet.  The United Nations must reconfigure itself, in light of the trend for it to be converted into a “club for the powerful”.  The Organization should return to its foundation of a more just representation of the world, in which those who needed to have their problems resolved could also have their voices heard.

He said that when it came to peace and stability, Africa, which had been the scene of many fratricidal conflicts, had resolutely stated its support for the peaceful resolution of conflicts — wherever they may be — through dialogue and peaceful negotiations.  Some world Powers used the humanitarian work of the United Nations as a “neo-colonial” pretext to violate human rights around the world.  In that regard, the entity that was the African Union must be respected.  The African Union recognized the victory of Libya’s National Transitional Council and supported its holding of free and transparent elections; it summoned the Governments of Tunisia and Egypt to do the same.  It congratulated South Sudan for becoming the United Nations newest Member State.

The world’s unpredictable economic situation was the result of an “irrational social and economic world order”, which had departed from the principles of equality, justice and fairness, he said.  Current barriers, blockages and discriminatory practices in trade relations, which perpetuated the impoverishment of some and the increasing wealth of others, could not be justified.  Africa was not asking for handouts, but for support, which required a readjustment of the economic procedures used in world trade.  While it was true that democracy was noble, its spirit must develop alongside the individual cultures.

In addition to the economic crisis, he said the African continent was facing the devastating effects of climate change, including drought, famine and non-communicable diseases, which affected millions.  The African Union was working to “face up” to the emergency in the Horn of Africa, but it still needed support from developed countries — which were responsible for the climate’s warming, owing to their high levels of industry.  The Government of Equatorial Guinea had adopted a national economic development programme with the aim of raising the country to the level of an emerging economic State by 2020.