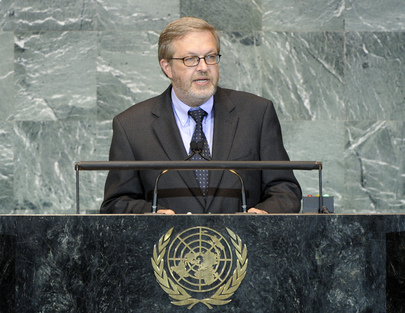 CARSTEN STAUR (Denmark) said that from Tunisia to Egypt, from Libya to Syria, from Bahrain to Yemen and beyond, the winds of change currently sweeping across the Middle East and North Africa had confirmed yet again that the desire for freedom, democratic reforms, and human rights was universal.  People in those regions were standing up for core human aspirations and values:  they wanted to shape their own lives, economically and politically.

Specifically on Libya, he said Denmark was proud to have supported the legitimate aspirations of the Libyan people and to have contributed to the protection of Libyan civilians.  It was encouraging that the Security Council had now authorized a new United Nations mission to support that country’s national efforts.  Developments across the Middle East and North Africa made it clear that in the twenty-first century, Governments had to be politically accountable, respect the people’s rights and dignity, and deliver on economic opportunities.  Even as the General Assembly met, events continued to unfold across the region, including in Syria, where more than 2,600 people had died during the popular uprising.  He strongly condemned the violence against, and killing of, peaceful demonstrators and called for increased international pressure on the Syrian regime, including sanctions, declaring:  “It is high time to respect the right of peaceful protests and their legitimate demands”.

On Afghanistan, Mr. Staur observed that the country had come a long way since the fall of the Taliban regime, and hoped Afghanistan would take yet another step in its transition during the upcoming conference in Bonn in December.  Moving towards 2014, the United Nations system, in close cooperation with the Afghan authorities, would have to undertake a thorough review of its activities in Afghanistan in order to continuously maximize its contribution towards good governance, anti-corruption and sustainable socio-economic development.  What was occurring around the world was not only a call for political reforms, but also a call for inclusive economic development, for jobs, and for improved standards of living, and not least of all from youth.  In that regard, Governments needed to strengthen economic and social reforms, ensuring that they generated growth and shared prosperity for all and not just for the few and already privileged.

The Millennium Development Goals had succeeded in galvanizing action, not least in health and education, he said, urging all countries to fulfil their joint obligation to ensure that the Goals were met by 2015.  The development challenge was pressing in sub-Saharan Africa, a region long marked by poverty and conflict, but in recent years, many countries also saw strong growth and optimism.  Stressing the importance of national ownership and clear political commitments to success, he said countries marred by conflict or fragility required a special focus.  Women’s empowerment was also important to that process.  Rio+12 in June 2012 was a unique opportunity to revitalize understanding of sustainable development and to put sustainable development at the top of the global development agenda.  Denmark also supported the two-State solution to the question of Palestine.