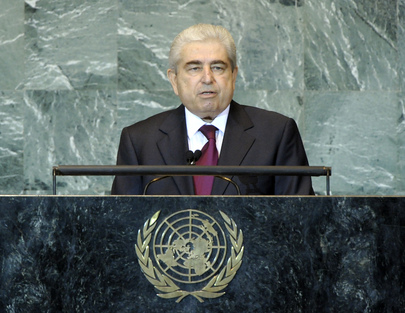 DEMETRIS CHRISTOFIAS, President of Cyprus, said the last six months had seen changes in the Middle East and North Africa, where popular movements aimed at carrying out fundamental reforms reflected peoples’ aspirations, and he expressed hope for their peaceful realization. The global community should offer support while respecting the sovereignty and territorial integrity of the Member States involved. Turning to his country, he said Cyprus was suffering from the illegal 1974 Turkish invasion and ongoing occupation. Indeed, the Cyprus problem was one of invasion and occupation, and the violation of both international law and human rights. His Government wished to achieve a peaceful solution through negotiations between Greek and Turkish Cypriots under United Nations auspices and on the basis of General Assembly and Security Council resolutions.

By way of background, he said direct negotiations between the leaders of those communities were resumed in September 2008, an effort that focused on a transition from a unitary State into a federated one with political equality, as defined in Security Council resolutions — “one State with a single international personality”. The negotiations were Cypriot-led and owned, as agreed with the Secretary-General, and excluded arbitration and artificial timeframes.

“We aim to achieve a mutually agreed solution,” he said, which would bring an end to the occupation, unify people and create the conditions for lasting peace. An important aspect to be settled was the issue of missing persons. Turkey must fulfil its obligations stemming from the European Court of Human Rights, especially with regard to opening the archives of its army to determine the fate of missing persons. In the first two years of negotiations, convergences had been reached on various aspects of the Cyprus problem, but lately, the Turkish Cypriot side was backtracking from those convergences. That change had drawn on Turkey’s “provocative” policies in the region.

In recent years, Cyprus had started exploration and potential extraction of hydrocarbons in its exclusive economic zone, which had been preceded by efforts to delimit that area with its neighbours within the framework of international law, including the 1982 United Nations Convention on the Law of the Sea. “We anticipate this effort will lead to new energy sources for Europe,” and the shared benefit of Greek and Turkish Cypriots. Reassuring Turkish Cypriots that, regardless of the circumstances, they would benefit from such a find, he said unfortunately, his Government’s efforts to exercise its sovereign rights to exploit marine wealth had been met by Turkish naval manoeuvres, which posed complications for the region.

Turkey also had concluded an illegal agreement in the occupied area of Cyprus, and he condemned that illegal act. Rather than taking a constructive stance, Turkey and the Turkish Cypriot leadership were trying to create tension and an illegal fait accompli. That behaviour had come amid Turkey’s efforts to start a new chapter in its European Union accession negotiations. Expressing gratitude to some permanent and non-permanent Security Council members and the European Union for their defence of Cyprus sovereign rights, he called on the United Nations to impress upon the Turkish leadership that any threat to or violation of Cyprus’ sovereignty would not be tolerated.

He expressed his Government’s commitment to finding a solution within the agreed process as soon as possible, saying he would work to strengthen cooperation between Turkish and Greek Cypriots. Indeed, rapprochement was integral to his Government’s policy. In that context, he urged restoring the city of Famagusta to its rightful residents, as it was still uninhabited because of the Turkish occupation. His proposal included the use of a port, which would increase trust between the two communities and lead to an “unfreezing” of some chapters in Turkey’s European Union accession process. However, Turkey refused to implement Security Council resolution 550 (1984). The only way to reach a solution was by upholding commitments taken in the presence of the Secretary-General. Negotiations must be carried out without backtracking.

Turning to the dispute in the Middle East, he said it was vital to resume the peace process on the basis of principles outlined in United Nations resolutions. Israelis and Palestinians alike deserved a peaceful, stable future within the framework of two independent States. He supported a free and independent Palestinian State alongside Israel within the 1967 borders. In other areas, he supported international efforts to end terrorism and the implementation of such measures in the context of convention on international terrorism. The ongoing global financial crisis recalled the need for a new economic model, with an emphasis on the fair distribution of social goods, such as education. Priority must also be given to unemployment, crime and marginalization, all of which caused social tensions.