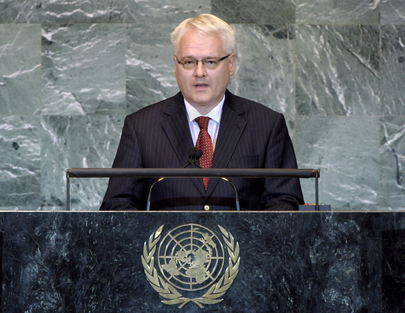 IVO JOSIPOVIĆ, President of Croatia, said that current challenges — whether they were the fall of autocratic regimes, nuclear non-proliferation and terrorism, ongoing global financial uncertainty or climate change — required the international community to stand firmly united and to offer sound solutions on the basis of solidarity and respect for the rights of all people. “Our responses must not remain just words. We need to translate them into concrete actions, aimed at advancing democracy, enhancing development and human rights.” Such responses should also promote social justice and the rule of law at all levels.

Turning to the theme of the general debate, he said the role of mediation in resolving disputes by peaceful means had been rightly recognized as an efficient and cost-effective tool at the disposal of the United Nations to deploy in its work for the maintenance of international peace and security. Indeed, political issues were often at the heart of crises, so the importance of early engagement and preventive diplomacy was vital, especially when the Organization’s peacekeeping architecture was under pressure.

He said, however, that keeping the peace was often not enough. In countries emerging from conflict, peace needed to be strengthened and consolidated. Croatia, in a relatively short time, had effectively transitioned from a donor-recipient to a donor-provider. Today, it was sharing its experiences with countries in the region, well as with others in crisis, where and when its knowledge of post-conflict nation-building could be particularly relevant. Croatia had shown much enthusiasm six years ago when the United Nations had established the Peacebuilding Commission; that body’s work was not only important, but it was underpinned by a principle on which the European Union had been built.

His Government had closed its accession negotiations with the European Union and expected to become a full member of that regional bloc in 2013, he said. Once it joined, Croatia would advocate for the bloc’s enlargement “and will not use its outstanding bilateral issues to set conditions for the progress of individual countries in the process of their integration.” He had had numerous meetings with regional counterparts, particularly in Bosnia and Herzegovina, and Serbia. Those discussions had dealt with the continuation of the reconciliation process and resolving outstanding issues between the three. Croatia had pledged technical assistance to the process of integration into the European Union and the need to jointly define regional infrastructure networks and to submit them as regional projects that could be funded through the Union.

He said that his country, as a NATO member, had a keen interest in seeing Southeastern Europe become a region of security, stability and development. That might not happen overnight, but Croatia firmly believed that with sustained efforts and targeted actions by all politicians and peoples, the region would overcome its misplaced reputation as “an arena of fragmentation [and] bloodshed.” He believed it would become a region known for its good neighbourliness, tolerance and mutual cooperation.