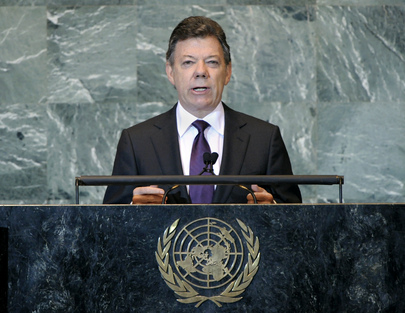 JUAN MANUEL SANTOS CALDERÓN, President of Colombia, said the past year had seen popular uprisings that were changing the planet both politically and economically.  While their impact depended on how they were managed, such crises could often become clouds with silver linings.  What people in North Africa and the Middle East were yearning for was freedom, as well as respect for human rights.  If the world turned its back on them, a period of civil war and ongoing conflict could result.  In that context, he stressed that the more preventive diplomacy was used, the better the results.  Nevertheless, to be effective, mediation must not attempt to create protagonists, but build trust and further progress.

He said those lessons were recently made clear in Latin America, where Governments and States of differing opinions found a way to live together peacefully.  Venezuela and Colombia united to bring together the parties to the political crisis in Honduras, forging a resolution through dialogue and a resumption of trust.  As a supporter of direct dialogue and effective mediation, Colombia was concerned about the cessation of peace talks in the Middle East and implored the parties to return to the table.  That was the only way to secure the desired outcome, he stressed, drawing a parallel to the path of South Sudan, which Colombia welcomed as the newest United Nations Member State.  Similarly, peace in Haiti would come only from the empowerment of Haitians themselves, and not from a peacekeeping operation.

Detailing Colombia’s plans to contribute to next year’s “Rio+20” sustainable development conference, he said the meeting’s main outcome should echo the thrust of the Millennium Development Goals and be based on the original 1992 Rio Conference.  Among other things, specific objectives must be defined to allow success to be measured and any delays to be evaluated.  Indeed, the planet’s future required the use of benchmarks to guarantee the effectiveness of efforts to curb climate change.

Turning to domestic developments, he said the development of new legislation, such as new laws on property rights, was making Colombia a fairer, more egalitarian country.  Colombians had decided that justice, truth and reparations should not have to wait for a conflict to end.  Other reforms included the establishment of a fairer distribution of oil and mining resources, and a constitutional amendment outlining criteria for fiscal responsibility, which ensured the State would maintain fiscal discipline.  That latter change would lead to a more stable economic future for Colombia, freeing it up to focus on pressing issues, such as poverty.

Enumerating ongoing challenges in fighting drug trafficking, he said there could be no doubt that drugs and terrorism threatened democracies and the rule of law.  For Colombia, it was a question of national security, although the State recognized success to be possible only through cooperation.  Highlighting the Latin American and Caribbean region as one of economic stability, he said it could provide the world with solutions on energy, climate and labour issues, among others.  The region also intended to advance hand in hand with the broader global community.