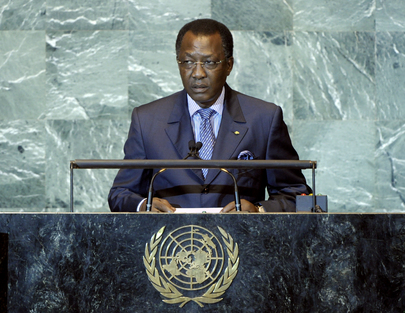 IDRISS DEBY ITNO, President of Chad, welcomed mediation for the peaceful settlement of conflicts as the theme for the general debate, which aligned with his country’s own visions for an egalitarian world. Chad had participated at the highest level in the Doha accords between the Sudanese Government and its armed opposition in Darfur and called for the entire international community to support those efforts to achieve peace in the country.

Expressing concern over increasing tensions and upheavals around the world, including the events known as the Arab Spring, he urged that solutions be found through reconciliation and forgiveness. Drawing attention to the long lines of refugees, he said Chad was well aware of their harsh reality and suffering since it had welcomed 100,000 from the Central African Republic and 200,000 from Sudan, in addition to the 180,000 Chadian internally displaced persons. Moreover, since the drawdown of United Nations Mission in the Central African Republic and Chad (MINURCAT), the Chadian Government had assumed responsibility for protecting those refugees and internally displaced persons, as well as the humanitarian organizations supporting them. To that end, it had created the “Détachment intégré de sécurité” (DIS), which was a special national force dedicated to that purpose.

He went on to say that Chad desired for Libya to once again find peace. It supported the National Transitional Council’s efforts to that end. However, his Government was concerned with the fate of the 100,000 Chadians still trapped in Libya and urged that commitments to protect them be honoured.

Underlining the effects of the economic, energy and food crises, he said they were impacting the ability of developing countries to achieve the Millennium Development Goals by 2015. For its part, Chad had lived through decades of external attacks and would be unable to achieve the Goals without support from the Heavily Indebted Poor Countries (HIPC) Debt Initiative. Moreover, the events unfolding in the Horn of Africa were an invitation for the international community to consider vital humanitarian questions in the most vulnerable ecological zones, where support was greatly needed. He also noted that Chad, in October 2010, had organized the Eighth World Forum on Sustainable Development with the theme of saving Lake Chad. The action plans emerging from that meeting needed the international community’s support, he said.

Continuing, he said there was a need for international consensus regarding the inalienable rights of the Palestinians. For his Government, that meant that a State of Palestine must live side by side with Israel, and he called for all peace-loving countries to commit themselves to that goal.

Turning to United Nations reform, he said the African people had too frequently been marginalized by the international systems of the past. Among other things, that had prevented them from playing their full role on the international stage. In that context, he stressed that the United Nations must be reformed on an accelerated basis in light of the legitimate claims of the African people. More specifically, that meant they should hold a permanent seat on the Security Council and be given the right to the veto.