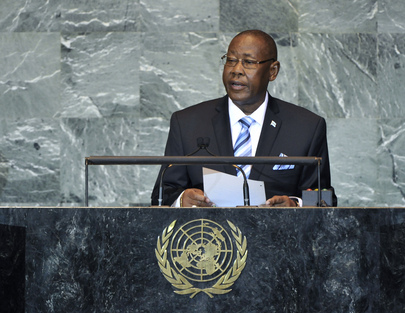 MOMPATI S. MERAFHE, Vice-President of Botswana, said all problems and challenges confronting humanity were capable of being resolved within the letter and spirit of the United Nations Charter and international law.  Each country must do its part to improve the lives of its people by conquering hunger, diseases and illiteracy, and by encouraging respect of human rights and freedoms.  Countries must also respond to natural disasters and various humanitarian situations.  Among other things, he noted the humanitarian situation in the Horn of Africa, which he said deserved the world’s continuing attention.

Paying tribute to South Sudan’s admission as the 193rd United Nations Member State after a seemingly endless bloody civil war, he called for the international community’s full support as that country confronted the challenges of nationhood.  He similarly urged the international community to continue to actively support peace consolidation, national reconciliation and reconstruction in Côte d’Ivoire.  He contrasted these notable strides toward resolving conflicts with other conflict situations — particularly in the Middle East, Somalia and Syria — where peace remained elusive.  Botswana noted the conclusion of the recent Kampala Accord between the President of Somalia’s Transitional Federal Government and the Speaker of Parliament and called on all parties to honour their obligation under that agreement. It also called on both the Palestinians and the Israelis to remain engaged in negotiations on the basis of a two-State solution.

He expressed deep concern about States that continued to violate their obligations under their own constitutions, as well as international law, to protect their citizens from armed conflict.  It was unacceptable under any circumstance for a State to use military force against its civilian population.  The world community should spare no effort in protecting civilians from repressive Governments and to hold them accountable for their atrocities.  In that regard, support for the International Criminal Court was crucial to realizing the Rome Statute’s full implementation.  Commending the Security Council on action in Libya, he expressed concern about the delay and procrastination on Syria, where crimes against humanity had been committed and for which the country’s leadership should answer.  He recognized the National Transitional Council as Libya’s interim Administration until an elected Government was in place and welcomed it into the United Nations family.

He said Botswana supported all efforts geared towards assisting the transition of countries from conflict to post-conflict rehabilitation, reconstruction and economic recovery.  He further underlined sustainable development and poverty eradication as critical pillars of the United Nations mandate, stressing that it was unacceptable for children to die from HIV/AIDS or any other preventable diseases because the Trade-Related Aspects of Intellectual Property Rights (TRIPs) hindered access to affordable education or that populations continued to be exposed to climate change’s dire consequences.  Clearly, more must be done with the collective resources available.  Above all, poverty eradication must remain the centrepiece of all policies and programmes.  At the same time, Botswana was increasingly concerned about the negative trend in negotiations towards a global policy on sustainable development, intended as the outcome document to next year’s United Nations Conference on Sustainable Development, “Rio+20”.  He urged a spirit of cooperation including through South-South cooperation to prevail.  Further, Botswana called for the implementation of the Almaty Programme of Action, as well as the conclusion of the Doha round of trade negotiations.