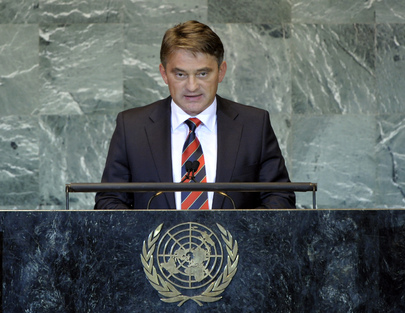 ŽELJKO KOMŠIĆ, Chairman of the Presidency of Bosnia and Herzegovina, noted that his country’s two-year Security Council membership would soon expire, saying that the experience proved that it could be an equal partner on the international diplomatic scene.  While on the Council, Bosnia and Herzegovina had helped to achieve a more efficient response to events that could threaten peace and it intended to share its experiences in post-conflict peacebuilding.  The Council’s thematic debate on that topic, initiated by Bosnia and Herzegovina, had concluded that success depended on building institutions that would enable to reduce its dependence on the international community.

Emphasizing his country’s determination to pursue full membership of the European Union, he said it placed special emphasis on regional and subregional cooperation and on dialogue with its neighbours, which represented the different cultures and traditions seen in the Balkans for centuries.  Bosnia and Herzegovina was committed to cooperation with them, based on mutual respect, and respect for national sovereignty and territorial integrity, he said.  It was also interested in developing mutually beneficial relations with others in the field of post-conflict peacebuilding on the basis of mutual respect for differences.  Such issues were closely tied to the country’s future integration into the European Union, the goal of which was to achieve the full functioning of national institutions, based on free-market principles, the rule of law and human rights protection.

He said his Government was following with concern the social and political events in Arab countries, and supported processes aimed at creating free and democratic societies, while calling for an end to the violence.  Bosnia and Herzegovina was also deeply concerned about the standstill in the Middle East peace negotiations, and wished to underline that the only way forward was a solution based on the peaceful coexistence of two sovereign States — a viable, independent Palestine and a stable, secure Israel.  Elsewhere, international efforts to deal with terrorism and to create the conditions for peace in Afghanistan required more work, he stressed, adding that his country had decided to send an infantry unit to join the International Security Assistance Force (ISAF).  Supporting full implementation of the United Nations Global Counter-Terrorism Strategy, he said his country was cooperating with others in the region to improve security.

Outlining other concerns, he called for everything to be done to prevent further erosion of the Millennium Development Goals, saying that the international community, and especially the United Nations, must redouble efforts to help the least developed countries in that regard.  As for climate change, Bosnia and Herzegovina shared concerns that drought, among other phenomena caused by global warming, threatened international security and required urgent action.  It joined States supporting the Copenhagen Agreement as a necessary step until a final, legally binding agreement was adopted.

With respect to United Nations reform, he supported the Secretary-General’s proposals, noting the importance of ensuring the efficient and coordinated functioning of all the Organization’s bodies and avoiding the duplication of activities.  He also emphasized that the Group of Eastern European States must have another non-permanent Security Council member.  As Chair of that organ’s informal working group on documentation and other procedural matters, the Bosnia and Herzegovina had Government set as a primary goal, the consideration of the Council’s working methods and transparency, he said, emphasizing that the Council should also be more active in preventive diplomacy.