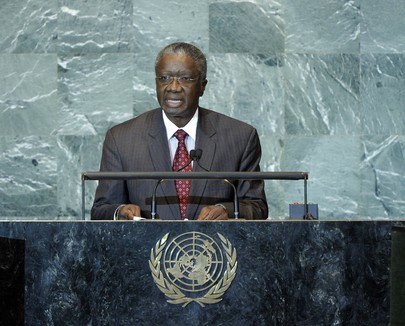 FREUNDEL STUART, Prime Minister of Barbados, said the present global economic downturn was a painful reminder of the interconnectedness of the world.  His Government had partnered with the local business community and trade unions to ensure that layoffs and wage demands in Barbados were kept to a minimum, so that the gain and pain of the downturn was shared equitably.  The Government was committed to protecting the most vulnerable, based on its conviction that a nation was more than just an economy; it was also a society.  The downturn highlighted the urgent need for a global financial architecture based on fair and transparent rules that would prevent the massive social dislocations now taking place.  The success of humanity’s development goals depended on the planet’s ability to sustain consumption and production patterns.  Therefore, he urged caution in the use of fossil fuels, carbon emission levels and unregulated waste treatment.

The already dramatic changes in climate and the prospect of sea-level rise threatened the very existence of small island developing States in the Caribbean and the Pacific, he said.  Barbados continued to work with other small island developing States to update and improve the Barbados Programme of Acton and the Mauritius Strategy and to ensure a successful Rio+20 Conference.  Turning to the protracted Israel-Palestinian conflict, he said Israel had the right to exist and live in security.  The Palestinians also had the right to their own sovereign State.  It was time for the Holy Land to become a symbol not of humanity’s divisions, but of its unity.  That state of affairs would only ensue when the “disgracefully long” wait of the Palestinians for a homeland was brought to an end.

He fully embraced Cuba as an important partner in the Caribbean region and supported its sovereign rights and hemispheric integration.  The United States economic embargo against Cuba would not facilitate that integration.  It had long outlived its usefulness and should be lifted.  Barbados was also committed to supporting Haiti’s development and helping it rebuild.  He fully supported the call in July of the Caribbean Community (CARICOM) Heads of State and Government for the international community to fulfil its pledge to finance Haiti’s reconstruction.

The United Nations must be the foremost form of collective security against terrorism, he said.  Terrorism should never be accepted or justified.  Barbados was an active, committed partner in global efforts to combat terrorism and other transnational criminal activities.  At their July Summit, CARICOM Heads of Government committed to accord the highest national and regional priority to combating and eradicating the illicit trade in small arms, light weapons and their ammunition.  CARICOM had a vested interest in the 2012 United Nations Conference on an Arms Trade Treaty.  It would continue to work with other Member States to forge a legally binding, robust and comprehensive treaty.