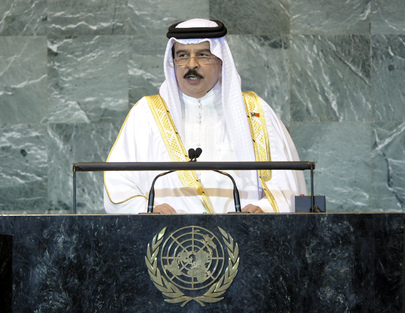 HAMAD BIN ISA AL KHALIFA, King of Bahrain, said that the world was entering a new era of important changes, in which the growth of modern means of communication had led to rapid transformation, such as that which was taking place in the Arab region. Bahrain itself had undertaken reforms more than a decade ago to satisfy the demands of its people for freedom, democracy and political participation. Reform had also aimed to provide decent living conditions, security and tranquillity, equality, equal opportunities for empowerment to achieve justice, and sustainable development for all. In all its modernization endeavours, Bahrain had taken the approach of dialogue. Building on the consensus of its people around the principles of the National Action Charter of 2001, it had initiated a dialogue process involving all sectors and components of its population. Today, he continued, the international community was offered a “propitious opportunity” to do justice to the Palestinian people to achieve their legitimate aspirations by recognizing their independent Palestinian State on their own national territory, with East Jerusalem as the capital. That move would put an end to the era of bitter Arab-Israeli conflict, subjected to a complete Israeli withdrawal from all occupied Arab territories to the lines of June 1967 in Palestine, the occupied Syrian Golan and the occupied territories in southern Lebanon. Additionally, he said, the issue of the three occupied United Arab Emirates’ islands should be resolved through direct referral to the International Court of Justice. Bahrain also supported the maintenance of security, stability and unity in Yemen, the preservation of unity in the Moroccan territory, and the resolution of the issue of the Moroccan Sahara, in accordance with the relevant Security Council resolutions. His country had contributed to and participated in the Group of Friends of Libya and the international peacekeeping force in Afghanistan, and it had shared the “heartfelt pain” of the American people caused by the reprehensible terrorist attack of 9/11, he said. Bahrain would remain faithful to the United Nations for its historic role in its sovereignty and for its judiciary for ending inter-State disputes worldwide in support of stability and development. Arabs-Muslims, Christians, Jews and followers of other religions and beliefs could only co-exist in a “civil State” based on tolerance. Bahrain’s experience — which was characterized by openness — made it a “deeply-rooted” symbol of peaceful cooperation and a “cultural and spiritual centre” of the Arabian Gulf region. It was imperative for all Member States to cooperate on a number of issues, including addressing climate change, international health, drought, poverty alleviation, disarmament, non-proliferation of nuclear weapons and combating terrorism, he said. Those were necessary components for addressing the important challenges facing humanity and for creating a new world defined by security, peace and progress.