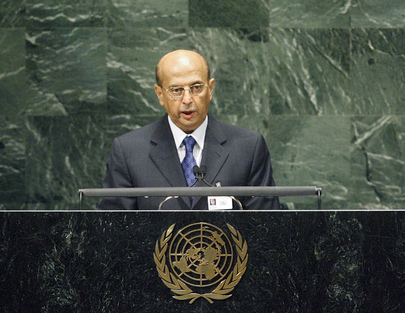 ABUBAKR AL-QIRBI, Minister for Foreign Affairs of Yemen, said the global financial crisis had affected his country’s progress towards the Millennium Development Goals. Low oil prices, which accounted for 75 per cent of Yemen’s national income, overpopulation, scarce water resources and limited help from development partners to fund poverty eradication, were all serious challenges for his country. In addition, Yemen’s share of official development assistance (ODA) was low. But, Yemen had recently agreed with the International Monetary Fund (IMF) to straighten out its budget deficit and was working to reduce its fuel subsidies to alleviate budget pressure. Among other steps, judiciary reforms had been adopted and the Government was working on its fourth five-year development plan. Discussions were under way with opposition parties to introduce constitutional reforms and form a national unity Government, with a view to conducting parliamentary elections in April.

He was confident that, with help from its partners, Yemen would build its abilities to combat terrorism and protect maritime courses in the Bay of Eden from piracy. Political developments had exacerbated that situation, including the rebellion in Sa’ada. Tens of thousands of people had been displaced and camps had been set up with help from relief organizations. The war had ended when rebels accepted six measures related to the Doha accords. “We are implementing accords observed by sisterly Qatar,” he said. The Government was following the rebels’ response to peace efforts. Yemen also suffered from the terrorist activities of Al-Qaida, which was trying to assassinate security leaders and entrench its position in the Arab peninsula, cooperating with those wishing to disrupt Yemeni unity. The Yemeni security apparatus had made headway, arresting terrorist elements and aborting their operations, but there also was a pressing need to foster national abilities. External interference to combat terrorism only created a local tendency to sympathize with terrorist elements. Yemen’s successes against Al-Qaida required strong international backing.

In other areas, as chair of the “Group of 77” developing countries and China, Yemen led difficult negotiations to reach the outcome document of the recent summit on the Millennium Development Goals, he said, and was leading other complex talks on climate change. In Pakistan, he urged standing by that Government to help some 20 million Pakistani flood victims. Turning to the Arab-Israeli conflict, he said Israel’s settlement policies, and refusal to abide by legitimate resolutions or Arab peace initiatives remained barriers. The United States should grant Israel one last opportunity to abide by all such accords. Should Israel not comply, the Security Council should terminate that conflict. Israel also must accede to the Nuclear Non-Proliferation Treaty (NPT) and enter into talks with the International Atomic Energy Agency (IAEA) to free the region from weapons of mass destruction.

As for Somalia, the situation was still dangerous, he said, citing piracy and the lack of effective help for the transitional Somali Government. Yemen suffered from the outflow of Horn of Africa refugees, most of whom were Somali. The Security Council should restore stability to that country. In Sudan, he called on the International Criminal Court to cancel its warrant against the Sudanese President. In Iraq, he was confident the dialogue process would help it avoid sectarian conflict. Yemen had hosted the Tenth Ministerial Meeting of the Association of South-East Asian Nations (ASEAN), where delegates underscored the importance of trade and piracy, among other subjects. That reflected Yemen’s desire to achieve cooperation among the world’s regions. Regarding the Goals, rising food prices, among other factors, prevented developing and least developed countries from making much progress. Yemen had adopted a national poverty eradication strategy and was working to implement it.