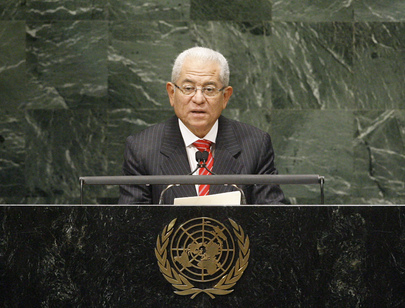 JORGE VALERO BRICEÑO ( Venezuela) called for the rebuilding of the structure and agenda of the Organization, which he said reflected the “existing and unjust power relationships in the world”. The lifting of the United States’ embargo against Cuba, demanded by the majority of the world, still had not been resolved. “What has this Organization done so that the United States Government abides by the will of the General Assembly? The answer is well-known: Nothing,” he stated. Turning to the “dozens of resolutions” adopted by the Security Council and the General Assembly on the Question of Palestine, he observed that regardless of such international efforts, the “occupying Power” still acted with impunity and the Security Council’s response amounted to nothing, as well.

Turning to the reform of the Security Council, he proposed that the right of veto, to which only five Members were entitled, be suspended. The Council’s permanent and non-permanent membership must also be increased. Further, he called for access to a democratic and transparent process so that all Member States could participate in the nomination and appointment of the election of the Secretary-General.

Turning to the financial and economic crisis, which had impacted developing countries and the vulnerable sectors of developed countries, he urged that South-South cooperation create alternative and sovereign mechanisms to avoid the “credit monopoly maintained by the Bretton Woods institutions.” To that end, Venezuela would focus on regional financial institutions such as the Bank of the Bolivarian Alternative for the Peoples of Our American and the Bank of the South.