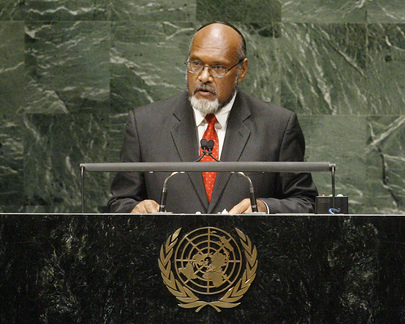 EDWARD NIPAKE NATAPEI TUTAFANUA’ARIKI, Prime Minister of Vanuatu, speaking on behalf of both his Government and as Chair of the Pacific Islands Forum, said his country was steadfast in its belief that the United Nations was uniquely suited to the pursuit and coordination of global initiatives. It had hosted the forty-first annual Pacific Islands Forum last month, during which Pacific leaders had noted that transnational crime, particularly the proliferation of small arms, light weapons, and illicit drug flows, remained a threat to stability. Consequently, the Forum strengthened cooperation in counter-terrorism measures and emphasized national efforts and regional cooperation to combat transnational organized crime.

He noted that, two years ago in Cairns, Australia, Pacific Forum members at the highest level had reaffirmed support for ongoing action by the Forum secretariat and stakeholders to raise awareness of the seriousness of sexual and gender-based violence. The Forum remained committed to collective arrangements to assist regional Governments recovering from conflicts, including the Regional Assistance Mission to Solomon Islands. The Pacific region, while known as a region of oceanic isolation and smallness, was only one of the few in the world to have experienced nuclear weapons testing. Therefore, advancing the cause of nuclear non-proliferation remained critical. Notwithstanding the size of their member countries, respective Forum members valued and were proud of their contribution to United Nations peacekeeping efforts.

Moving on to issues of the Millennium Development Goals, he said he remained concerned about the pace of progress, but noted the Port Vila Declaration on Accelerating Progress on the Achievement of the Millennium Development Goals, which recognized that the Goals were extremely important, as well as the special circumstances of the Pacific region. There, climate change remained the greatest threat to the livelihoods, security and well-being of the peoples and, thus, concerted efforts on national, regional and international levels were being made.

Vanuatu had celebrated 30 years of political freedom in July, he said, adding that 2010 also marked the end of the Second International Decade for the Eradication of Colonialism. Questioning progress on some important self-determination processes, he said “It is disturbing to think that we may be ‘legitimizing’ practices that contravened the very principles this Organization has been founded on.” He urged the United Nations to strengthen its efforts towards the full decolonization of territories which were still under the control of administrative Powers. He was encouraged to see emerging nations such as Kosovo take up their position in the midst of independent nations of the world.

Touching on other topics, he mentioned the mechanisms and criteria for assessing graduation eligibility for least developed countries, which, he said, must not be isolated from the inherent vulnerabilities of those countries. Vanuatu believed all players were interested in seeing positive political progress in Fiji. Towards genuine and renewed commitment to foster relations in the Pacific region, he called upon international and regional diplomatic approaches not to polarize the region and to give dialogue and engagement a “more credible opportunity”. He expressed gratitude to the development partners for their support in building the economies of island countries of the Pacific.