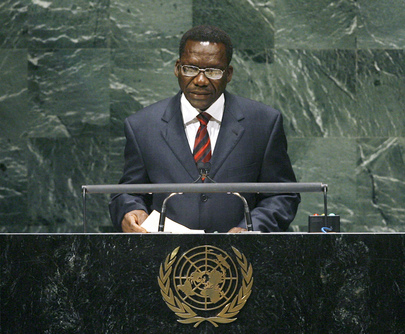 MIZENGO P. PINDA, Prime Minister of the United Republic of Tanzania, who hailed the just-concluded Millennium Development Goals summit a success, said those Goals would not be attained without sustained economic growth and sustainable development; and for Tanzania, where the vast majority of the people depended on agriculture for their incomes and livelihoods, poverty could not be alleviated without addressing the challenges of production, productivity and markets in the agricultural sector.  With that realization, Tanzania had developed a programme it called “Agriculture First”, aimed at transforming and modernizing that sector.  A key component of the programme was the improvement of infrastructure - especially irrigation systems, transport and energy.

However, a major challenge remained on how to finance the huge investment gap in infrastructure, which he said would not be filled by the public sector alone, and the participation of the private sector was imperative.  On the issues of good governance, and peace and security in Africa, he reaffirmed his country’s commitment to democratic good governance, rule of law and respect for human rights.  A recent peaceful referendum in Zanzibar had produced a new political dispensation that provides for a government of national unity.  That should stabilize Zanzibar, as Tanzania prepares for its general elections scheduled for 31 October.  As in previous elections, he said, “we will do everything in our power to ensure that the elections are peaceful, free and fair.”

He was also pleased that the continent had continued to play a leading role in conflict prevention, management and resolution, as well as entrenching good governance principles.  He praised the peaceful referendum in Kenya that paved the way for a new Constitution, saying it demonstrated the will of African countries to take charge of their own destiny, and commended all who continued to work for a political solution in Darfur.  He also called on all parties to keep to the timetable for the referendum in southern Sudan, saying the wishes of the people of southern Sudan had to be respected.  He pledged his country’s full support to the team of prominent persons, which included Tanzania’s former President, in monitoring the process.  He added his country would continue to play its role in ensuring lasting peace and stability in Africa and elsewhere, noting that that role would include contributions to United Nations peacekeeping operations and missions in Africa and elsewhere, including those already deployed in Darfur and Lebanon.

Specifically on the situation in Somalia, he expressed concern about the worsening political, humanitarian, social and security situation in that country which threatened the entire region and ultimately the world.  He commended Uganda and Burundi for contributing peacekeeping troops in Somalia and the African Union Mission in Somalia (AMISOM) and further thanked all those African countries that had made the commitments to provide additional troops to that Mission.  He asked the international community to provide the support needed to make that deployment possible and timely.  He also expressed worry about the continued increase in piracy activities in the Gulf of Eden and Indian Ocean, which was now spreading beyond the coast of Somalia.  In his view, piracy could not be resolved on the seas alone, without addressing the causal factors on land.  In that regard, a coordinated, coherent, comprehensive and integrated response, which incorporated political, military, financial and legal support, was indispensable.

Further, he implored the United Nations and the international community to work closely with the African Union, members of the Intergovernmental Authority for Development (IGAD) and other neighbouring States to suppress acts of piracy, as well as apprehend and prosecute those who committed that crime.  His country had recently amended its Criminal Code to allow courts to prosecute suspected pirates under universal jurisdiction, and he called on the international community to enhance the prosecution and custodial capacities of countries - such as his -that apprehended and prosecuted pirates and also accept to share with affected States post-prosecution custodial responsibilities.  On refugees, he said his country had been a home for many refugees over the years.  The current stability in neighbouring countries had enabled voluntary repatriation for many, which had allowed the closing of 12 refugee camps.  His country had also continued with its tradition of granting citizenship to refugees who had been in the country many years.  In April, for example, it naturalized 162,254 refugees who entered the country in 1972 and who were now being integrated into society.  However, that was a costly exercise that placed a huge burden on poor countries such as Tanzania.  He urged the international community to support integration programmes under the equitable responsibility and burden-sharing principle.