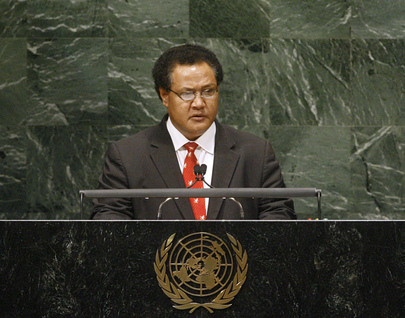 AFELEE FALEMA PITA (Tuvalu) said last week’s implementation review of the Millennium Goals had demonstrated that successes in achieving the Goals were easily reversed by the economic and environmental vulnerability of small island States. The recent global financial crisis had exerted an enormous adverse effect on his country’s economy, particularly in the increased cost of imported fossil fuels that was crippling the national budget. Tuvalu had a desperate need for renewable energy and energy-efficient technologies appropriate for its unique conditions. As pointed out at the Mauritius Strategy review, Tuvalu had three key outcome areas in which it needed support: regulating and policing illegal, unreported and unregulated fishing; developing a climate risk insurance mechanism that drew on public international financing to underwrite the costs of premiums and payouts so as to recover after severe weather events; and securing proper acknowledgement of small island State concerns in the United Nations process, as well as recognition of them as a discrete group in the United Nations system.

In view of the slow progress made under the United Nations climate change process and the lack of concrete commitments on the part of key greenhouse gas emitting countries, he said, three political commitments should come out of the Cancun meeting later in 2010. First, all amendments and rules for the Kyoto Protocol should be agreed so that amendments were ready for ratification without a gap between the commitment periods. Second, a mandate should be decided for start of negotiations on a legally binding agreement based on all elements of the Bali Action Plan. And finally, a set of decisions should be agreed upon that would provide interim steps in the implementation of measures to be incorporated into the legally binding agreement.

Concluding, he said Tuvalu’s economic and environmental vulnerability could not be overemphasized. The United Nations and development partners must recognize that vulnerability when reviewing the criteria and considering the graduation rules for least developed countries to move into middle-economy status. Finally, climate change must be treated as a cross-cutting issue. Pledges and commitments offered by the international community to address the effects of climate change were appreciated. However, they fell short because access to such funds was difficult and time consuming for small island States to undertake in the timely manner required.