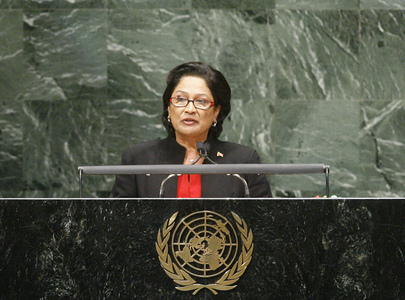 KAMLA PERSAD-BISSESSAR, Prime Minister of Trinidad and Tobago, said the United Nations must continue to provide a voice for all States and must be the centre of all discussions and decisions geared towards meeting the demands of its membership. Global governance meant more than just agreement on a body of rules, laws or practices placing the United Nations at the centre. It meant leaders and institutions were held more accountable for their actions to deliver a better quality of life for all. She called for the establishment of predictable and regular channels to facilitate dialogue between the G-20 nations and United Nations Member States, which constituted “the G-192”.

She urged the international community to do more to deal with the economic plight of its most vulnerable members. There was also an urgent need to provide the necessary assistance to developing countries to meet the Millennium Goals. Trinidad and Tobago had recently made its own efforts, by creating a Ministry of the People to deal with poverty and hunger elimination. The country’s Children’s Life Fund also provided funding and critical support for youngsters needing life-saving surgery. Children must not die because they could not afford health care. The prevention of non-communicable diseases was another area to be tackled, and she urged States to participate in next year’s high-level meeting on the topic.

The scourges of climate change and natural disasters also needed a concerted effort to achieve results, she said. Long-term strategies were being devised to reduce the incidence of flooding in her country. She called upon able States to contribute to the Central Emergency Relief Fund to better aid those affected by those and other crises. Illegal arms and drug trafficking were other topics that needed prompt attention and sustained support. In addition, the international community should support the establishment of UN Women, and Trinidad and Tobago would introduce in the First Committee (Disarmament and International Security) a resolution on women, disarmament, arms control and non-proliferation.

One decade into the new millennium, the international community had made strides in communications technology, but there were too many fences of politics, ideology, religion, ethnicity, culture and traditions, she said. The world should promote conversations between nations and people to replace aggression and threats with dialogues, founded on mutual respect that would ensure the survival of the human race and the planet.