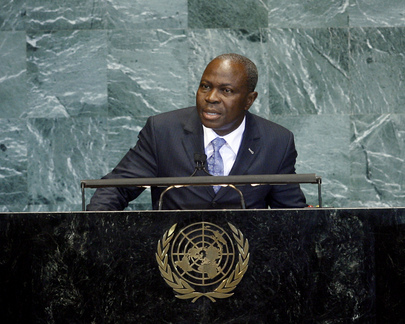 GILBERT FOSSOUN HOUNGBO, Prime Minister of Togo, said that the theme of the General Assembly in reaffirming global governance translated into the aspirations of Togo and other developing countries. Because the United Nations must remain at the heart at multilateralism, Security Council reform was essential to establish democracy and equality, and assure appropriate response to the challenges confronting the global community.

On a national level, Togo’s search for better governance, peace, freedom and justice, and to “turn the page on dark days” once and for all, had come to fruition, he said. The 2006 signing of a global political agreement had made it possible to establish a Government of National Unity, and in 2007, to hold a fair and free election, absent violence for the first time. Those developments had led to a pluralist assembly, and reforms were now being implemented. Furthermore, the creation of a security force for the presidential elections had been trained in international standards and had fulfilled its task throughout. The 2010 elections, heralded by the international community, had been peaceful and democratic.

Moreover, he said, the President’s appeal for all to take part in nation-building had resulted in an historical political agreement between the opposition, the Union of Forces for Change and the majority of the President, and for the first time, the Union had entered the Government with seven ministerial posts, after 40 years of fighting. The Truth, Justice and Reconciliation Commission, which would be focusing on the political violence that had occurred between 1958 and 2005, was currently taking depositions.

Togo would work devotedly towards stability and peace, and sustainable development as outlined in the Millennium Development Goals, he said. Now that it had become “reconciled with itself”, his country looked forward to renewing bilateral partnerships and to entering into international cooperation. However, even with the positive signs of world recovery, stabilization was still “perilous and uncertain”. The new problem of climate change had wrought floods, droughts, and landslides, and thus had negatively impacted international growth and development, particularly with the least developed countries. Yet, despite all the evidence of the climate change problem, the world’s nations had still hesitated to reach an agreement in Copenhagen. Towards that goal, he stressed that “the time for speeches is over. It is time to act and to act now.”