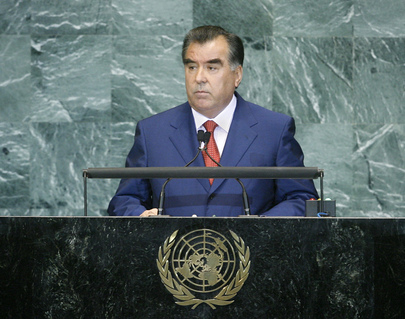 EMOMALI RAHMON, President of Tajikistan, said that strengthening of a global partnership was essential for creating an environment favourable for sustainable economic growth and increase in employment. Revitalizing global trade and investments was necessary to drive industrial growth. That was particularly vital for landlocked countries, whose participation in global trade was hampered by their geographical situation, affecting industrial growth and achievement of the Millennium Development Goals. Efforts should focus on creating new international transport systems and corridors and efficient use of existing ones to help put an end to such countries’ marginalization.

He called for a speedy completion of the Doha Round of multilateral trade negotiations, which would contribute to the achievement of the Millennium Development Goals. Trade systems must remain open, he said, particularly in times of crisis. They must be non-discriminatory and based on concerted rules.

While the ultimate in quantitative growth had been achieved in terms of development, that should be followed by qualitative new developments, requiring an entirely new approach that took into account the interests of current and future generations. The Government of Tajikistan had formulated three strategic goals, namely, ending communication isolation, ensuring energy security and ensuring food security. To achieve the Millennium Development Goals, the country had adopted and was implementing a “National Development Strategy of the Republic of Tajikistan till 2015 (NDS)” and the “Strategy for Poverty Reduction”, to achieve sustainable economic growth, improve access of the population to basic social services and reduce poverty.

To address long-term issues such as climate change, preservation of biodiversity and desertification, a transition to sustainable development was necessary, and needed to be regarded from a critical point of view particularly after last year’s Copenhagen conference. More resolute measures should be taken to mitigate emission of detrimental gases, and transfer technologies should be transferred that promoted a low-carbon economy. He expressed conviction that the forthcoming meeting in Cancun would produce a new global agreement to serve as an important milestone in the post-Kyoto period.

With regards to combating international terrorism, he said that it could not exist without financial support, a major source of which was illegal drug trafficking. Because Tajikistan found itself between the major world producer of opium and heroin, and drug-consuming countries, and given the fact that its border with Afghanistan was almost 1,500 kilometres, it must perform the role of a buffer to block the ever increasing stream of “white death”. Combating narcotics successfully could only be achieved through consolidated and collective efforts. To involve Afghanistan in the process of multifaceted regional cooperation, he underlined the efforts undertaken by the “Quad” – comprising Afghanistan, Pakistan, Russian Federation and Tajikistan – aimed to counteract narcotics and terrorism.